Do the Vikings Have a Shocking Draft Planned?

When the Minnesota Vikings begin their offseason of turnover following a 13-win 2022 season, the expectation should be that key portions of the roster look drastically different in 2023. One way that could substantially shift the organization would be to pull off a shocking draft.

After taking over for Rick Spielman prior to the 2022 NFL Draft, Kwesi Adofo-Mensah will undergo his second exercise with Minnesota. Kevin O’Connell is now firmly entrenched as the Vikings head coach, and despite Ed Donatell coming back or not, it looks like needs on the defense are plentiful. As things stand currently, Minnesota has just four picks, so what if they get aggressive and make a shocking move?

Without an extension, this should probably be the last season that Kirk Cousins is employed by the Minnesota Vikings. With massive salary cap implications and a limited ceiling, needing to find a Cousins successor should not be shocking to anyone. Having already went the route of a mid-round pick when the previous regime missed on Kellen Mond, maybe it’s time they take a more aggressive stance?

First and foremost, the Vikings are probably going to have a tough time grabbing the QB of their dreams at pick 23. They also only have a guaranteed third, fourth, and fifth round pick from there. They definitely could trade future assets, but there is very little draft capital this year for them to package in a deal. They do have assets to move such as Dalvin Cook, Harrison Smith, Eric Kendricks, and others, but none of them will net a high pick if anything at all.

Throwing a bit of logic to the wind here, let’s assume Minnesota finds a way to move up and get a guy. There are only a handful of options.

Alabama’s Bryce Young is seen as a top five selection, and with good reason. The problem is that he is tiny in stature checking in below six feet and less than 200 pounds. Then there is Ohio State’s C.J. Stroud, who is probably most categorized as a pocket passer. Kentucky’s Will Levis probably is gone in round one even if his grade comes in a bit lower, and Florida’s Anthony Richardson has projections of the same ilk.

Outside of that group you get into plenty more developmental projects. Stanford’s Tanner McKee exists as does. Hendon Hooker, Malik Cunningham, Jaren Hall, and Max Duggan should all be available beyond the first round. Assuming Minnesota wants to get aggressive, they wouldn’t need to trade up for any of these.

Anyone the Vikings bring in would have the opportunity to sit behind Cousins for a season and develop. They could see how O’Connell’s offense works and try to establish a chemistry with the receiving corps. They wouldn’t be thrust into a situation ahead of readiness, and grooming the player for long term success has to be the goal. We have seen this work for many of the teams making deep runs into the playoffs, and that could be the next transition Minnesota needs to sustain competitiveness. 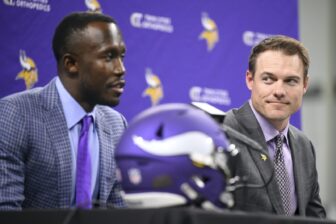 Ted Schwerzler is a blogger from the Twin Cities that is focused on all things Minnesota Twins and Minnesota Vikings. He’s active on Twitter and writes weekly for Twins Daily. As a former college athlete and avid sports fan, covering our pro teams with a passion has always seemed like such a natural outlet.