Now that the Minnesota Vikings have been eliminated from the playoffs, and their 2022 season is complete, all the focus now turns to the offseason and how Kwesi Adofo-Mensah and the front office will construct the roster for 2023.

One major way that they will do that is through the 2023 NFL Draft, and The Draft Wire of USA Today released their latest mock draft following the Wild Card round of the playoffs. In that mock draft, Luke Easterling sends the Vikings an offensive weapon to complement Justin Jefferson at wide receiver. That weapon is Jaxon Smith-Njigba out of Ohio State. For a full breakdown of his draft profile, check out our Vikings Draft Thermometer series breakdown of skillset.

Smith-Njigba was a major producer for the Ohio State Buckeyes in 2021, but his 2022 season was derailed by injury. He appeared in just three games, catching 5 passes for 43 yards. However, his 2021 season where he caught 95 passes for 1606 yards and 9 TDs showed that he has the capability of racking up huge numbers.

The problem is, he put those numbers up exclusively in the slot with an offense that also featured Chris Olave and Garrett Wilson at wide receiver. 2022 was supposed to be the season where he showed what he can do as a true WR1 playing as an X receiver, but that never really happened.

Regardless, if Smith-Njigba landed with the Vikings, there should be little doubt that he can be productive opposite the best receiver in the league, Justin Jefferson. Additionally, he was one of the best one-on-one receivers in the NCAA during 2021, making tons of contested catches despite being of a smaller stature.

That being said, I have Smith-Njigba graded as a second-round receiver for a couple reasons. One of those reasons is his lack of production outside of the slot, but there are also question marks surrounding his athletic ability. He bursts off the line of scrimmage adequately, but there isn’t much of a second or third gear in his repertoire. What you see is what you get from him.

This could limit his ability as a true deep threat in the NFL, and that lessens his appeal for the Vikings who already have dominant short-intermediate receivers in Jefferson and T.J. Hockenson. What the Vikings really need is an elite playmaker on deep balls, so that could cause the Vikings to look elsewhere at receiver. Personally, I think Nathaniel “Tank” Dell out of Houston could be a good option. 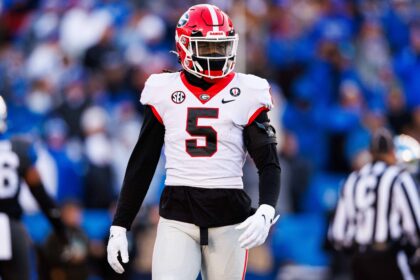