By Josh Frey   |
Houston quarterback Clayton Tune (3) passes against Auburn during the Birmingham Bowl at Protective Stadium in Birmingham, Ala., on Tuesday December 28, 2021. Bham48

The Vikings actual football season may be over, but the season of mock drafts is just beginning. Here on PurplePTSD, we will be doing weekly Vikings mock draft Mondays to prepare for the 2023 NFL Draft on top of the Vikings Draft Thermometer series daily every Tuesday-Friday leading up to the draft. For this mock draft series, we will be using the simulator on NFLMockDraftDatabase.com. So, kick back, relax, and let’s talk about these potential future Vikings.

Linebacker has been a position that I’ve had my radar on going all the way back to the early portions of the regular season. All this past Sunday’s playoff loss did was prove that the Vikings desperately need improved play at that position if they have any hope of this Ed Donatell defense finding success in 2023.

So, when Trenton Simpson fell down to No. 23 in the draft, I jumped at the opportunity to snatch him up. Simpson has the potential to be the next Eric Kendricks for an NFL defense. He can do it all from the off-ball linebacker position whether it’s stopping the run, dropping back into coverage, or even rushing the passer.

Simpson’s speed jumps off the page, and he very easily could run in the 4.4s and might even dip into the 4.3s at the combine this spring. He needs to improve some things in terms of pass coverage, but overall, he’s the best off-ball linebacker in this class.

The Vikings sneakily could be in a decent place at the cornerback position, depending on what happens with Patrick Peterson and Duke Shelley this offseason. The surface hasn’t even been scratched yet regarding Andrew Booth Jr., either. However, as former head coach Mike Zimmer loved to say, you can never have enough defensive backs.

Because of that, the Vikings select a CB on the second day of the draft for the second consecutive year, snagging Max Melton out of Rutgers. The 6-foot CB is an extremely physical player at the line of scrimmage, and while he needs to improve some aspects of his pass coverage, particularly in zone, he carries starting potential with him.

Who wouldn’t want to draft a wide receiver nicknamed “Tank”? In reality, though, Nathaniel Dell is far from a tank in terms of his physique. He stands at 5’10 and just 165 pounds, but he’s an absolute lightning rod in terms of his production.

Between the 2021 and 2022 seasons, Dell provided the Houston Cougars with 199 receptions, 2727 receiving yards (over 1300 in each season), and 29 TDs. Sure, his small stature probably limits his ability to be a WR1/WR2 type of player in the NFL, but Tank can be a big play threat whenever he’s on the field.

Plenty of fans probably would have liked to see a QB go earlier in this mock draft, but I just don’t think it’s realistic for the Vikings to target one this year considering the talent that should come with the 2024 Draft class. Plus, we’ve seen a couple of seventh-round rookies this season play in playoff games and perform rather well.

However, Minnesota does need to start planning for a Kirk Cousins replacement, and Clayton Tune joins his Houston teammate Dell on the Vikings. Dell was the beneficiary of Tune throwing him the ball throughout his collegiate career, and the duo really broke out together in the Cougars offense.

Honestly, it wouldn’t be surprising at all to see Brenton Cox Jr. go off the board much earlier in the draft than the sixth round. However, this time around we were able to snag him, and crazy things can happen once you get into the mid-to-late rounds of the draft.

The Vikings have a decision to make regarding Za’Darius Smith this offseason (cutting him saves nearly $12 million in cap space), and regardless, Minnesota could use more depth at the EDGE/OLB spot. Cox has a very high motor and combines that with some explosive athleticism and technically sound pass rushing skills. If he’s available this late in the draft, someone’s going to take a flyer on him, so it may as well be the Vikings.

The Vikings definitely win the name draft if things play out this way where they get both Tank and Juice. Again, though, this late in the draft, we’re all about taking flyers on players that could fill needs down the road. Juice Scruggs has experience at both center and guard for Penn State.

The Vikings have Garrett Bradbury set to hit free agency offseason, and unless Ezra Cleveland gets an extension this offseason, he’ll hit the market in 2024. Scruggs is a fierce run blocker in the middle of an offensive line that can provide some depth at these uncertain positions. 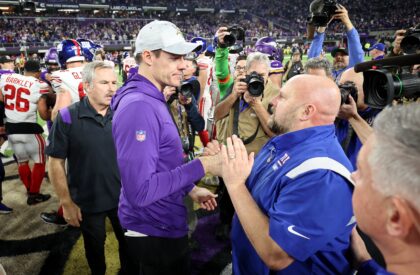