The Vikings Have a QB3

After the Minnesota Vikings cut both Sean Mannion and Kellen Mond earlier this week, Kwesi Adofo-Mensah and the new Vikings regime hoped they’d be able to add one of them to the practice squad. Such luck did not occur as both players left for new teams. Mond was claimed off waivers by the Cleveland Browns while Mannion signed on with the Seahawks to play on their practice squad. This left Minnesota scrambling as they tried to find a QB for their own squad of practice players. On Thursday afternoon, a solution for the Vikings QB3 emerged in David Blough, according to Chris Tomasson of the Pioneer Press.

Blough entered the NFL as an UDFA in 2019 following his collegiate career with the Purdue Boilermakers. He signed with the Detroit Lions, and during his rookie season, he made five starts. Matthew Stafford suffered a back injury midseason, and Jeff Driscoll came in to make three starts before being replaced by the rookie third stringer.

It was a rough go of things for Blough as the Lions went 0-5 in his starts, and he completed 54% of his passes for 984 yards, four touchdowns, and six interceptions. The season was capped off with a dreadful finale against the Green Bay Packers in which the Lions lost 23-20 and Blough completed just 12-of-29 passes for 122 yards with zero touchdowns and an interception. Detroit finished the year 3-12-1.

Following that season, Blough has not started another regular season game and has appeared in just two of them. This largely has to do with the fact that Detroit’s starters, Stafford in 2020 and Jared Goff in 2021, have been healthy, but he has also been the QB3 project in these years.

This preseason, Blough played fairly well, passing for 377 yards, two touchdowns, and an interception over the course of the three games. That said, he made a few critical mistakes along the way, including a game-costing fumble in the first game.

Because of this, Detroit cut the fourth year QB, and that led Minnesota to pick him up as the new Vikings QB3 and stash him on the practice squad. If anything were to happen to either of Kirk Cousins or Nick Mullens, Blough would be the guy to suit up for games. 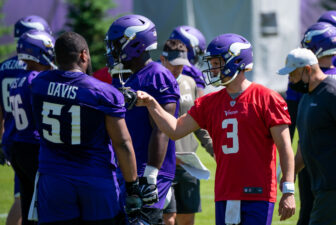 Also Read:
Some of the Former Vikings Who Were Cut