The Vikings Give Positive Updates on Two Injured Rookies

The Minnesota Vikings spent their first two picks of the 2022 NFL Draft on a pair of defensive backs in the hopes that this influx of youth would improve a secondary that struggled mightily in 2021. Those draft picks obviously were safety Lewis Cine out of Georgia and cornerback Andrew Booth Jr. out of Clemson. Since then, Booth has yet to play a defensive snap and Cine has only played two snaps on defense.

This largely is because of injuries to the pair of them. Cine obviously is out for the remainder of the 2022 season after suffering a compound fracture this past weekend against the New Orleans Saints. Meanwhile, Booth played two special teams snaps in Week 1 against the Green Bay Packers before leaving with a quad injury. He has not played since.

These injuries have to be frustrating for two top-50 picks who were eager to get their NFL careers started, but the Vikings were able to give positive updates regarding their two injured rookies.

For Lewis Cine, he underwent two successful surgeries early in the week to help repair his fractured leg. His recovery begins in London, but he should travel to Minnesota in due time to begin rehabilitation. Wednesday was Cine’s birthday, and the news was about as sweet as it can get at this point. Obviously, the safety has a long road ahead of him, but head coach Kevin O’Connell stated that early signs are pointing towards Cine being able to return in 2023.

As for Booth, the rookie cornerback returned to practice on Wednesday for the first time since suffering his quad injury against the Packers. He remains as a limited participant on the injury report, but this is a step in the right direction. O’Connell stated from the beginning that he anticipated Booth’s injury being short-term, and he looks correct as of now.

In fact, the Vikings provided boatloads of positive injury news on Wednesday with the first injury report for Week 5. Every single player on the 53-man roster participated in practice on Wednesday. The only players on the report were Booth, Cam Dantzler (hip), and Za’Darius Smith (knee). Booth and Smith participated in a limited capacity while Dantzler was listed as a full participant.

With the Chicago Bears always providing physical, tough games for the Minnesota Vikings, they certainly need to be as healthy as possible going into this game. As of now, it appears that they are just that. 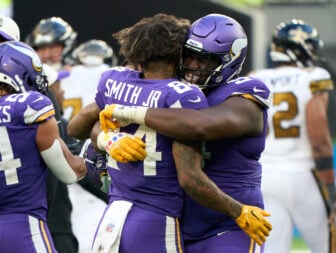 Also Read:
The Vikings Have the Fourth-Best Playoff Odds in the NFC