The Minnesota Vikings made their final roster moves ahead of their road game against the Washington Commanders on Sunday. Among those moves, a rookie tight end gets activated for the second time in 2022. That rookie TE is, of course, Nick Muse.

Muse was Minnesota’s seventh-round pick in the 2022 Draft, being selected with the 227th overall pick out of South Carolina. Over his collegiate years from 2019-2021, Muse piled up 67 receptions, 805 yards, and three touchdowns.

Muse has been on the Vikings practice squad throughout the season after missing the cut on the final 53-man roster. Despite the trade acquisition of T.J. Hockenson, the Vikings have depth issues at the tight end position. Both Ben Ellefson and Irv Smith Jr. are in IR, leaving Minnesota with just Hockenson and Johnny Mundt as healthy TEs on the active roster.

Because of that, Muse gets the call for the second time. His first activation came in Week 5 against the Chicago Bears, and he appeared in six special teams snaps. His role likely remains exclusive to special teams this week as the Vikings integrate Hockenson into the offense.

In addition to activating the rookie tight end, the Vikings made two other roster moves ahead of Sunday. Veteran wide receiver Dan Chisena joins Muse on the active roster for Week 9. This also marks the second time that Chisena has been activated by the Vikings this season, and coincidentally, it also came in Week 5 against the Bears. He played eight special teams snaps in that game and recorded a tackle.

Meanwhile, Jalen Nailor is out for this game. He’s been on the injury report all week with an illness that forced him to miss practice. Evidently, it is still bothering him as the rookie receiver will miss his second game of the season.

On the other side, the Washington Commanders have elevated FB/TE Alex Armah and LB Nathan Gerry from the practice squad for this week. Second-year offensive tackle Sam Cosmi is also listed as questionable for tomorrow’s game. Cosmi has been struggling through a hand injury since the beginning of October, and he hasn’t started a game since Week 4.

Kickoff between the Commanders and Vikings is scheduled for 12 PM CST at FedEx Field. 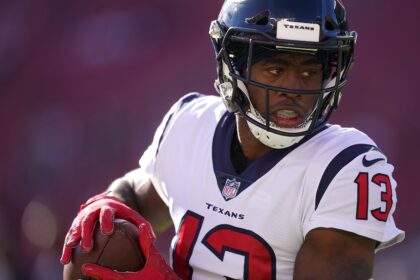 Also Read:
Houston Simply Wanted Too Much for Brandin Cooks