Justin Jefferson Is Awarded with NFC Offensive Player of the Week

After recording a career-high in receiving yards, as well as making one of the greatest catches in NFL history, Justin Jefferson is awarded with the NFC Offensive Player of the Week for Week 11. His performance was an integral part of the Vikings upset win over the Buffalo Bills on the road.

After an overtime field goal from Greg Joseph, and a game-sealing interception by Patrick Peterson, the Vikings won, 33-30.

This is the second time that Jefferson has taken home the award over the course of his career. The first time he earned a Player of the Week award came during Week 11 of the 2021 season.

You’ll remember that as Minnesota’s home victory over the Green Bay Packers where Greg Joseph hit a 29-yard game-winning field goal at the end of the fourth quarter. The Vikings ended up winning that game by a score of 34-31.

Jefferson finished that game with eight catches for 169 yards and a pair of touchdowns. At the time, it was the third game in which Jefferson eclipsed the two-TD mark. He proceeded to do so again against the Packers in Week 1 of the 2022 season.

This most recent week, though, may be the most impressive performance of Justin Jefferson’s young career.

The Vikings star receiver recorded 10 catches for the third time this season, and he put up 193 receiving yards, which is a new career high. It broke his former career-high of 184 yards that he set in that aforementioned Week 1 game against the Packers just two months ago.

Not only did Jefferson put up gaudy numbers, but he did so in extremely crucial situations. His 4th-and-18 one-handed catch was undoubtedly one of the greatest catches we’ve ever seen a player make.

Jefferson caught five passes for 88 yards during the fourth quarter and overtime on Sunday. He also drew a 19-yard DPI penalty. These are numbers that most receivers would consider good-to-great if they put them up over the course of a game. Jefferson did so over the course of about 10 minutes of game time.

Over the past six games for the Vikings, Jefferson has been on a torrid pace. He’s eclipsed 100 receiving yards in five of the six outings, and Sunday was the second time he broke 150 yards during this stretch. In all, here’s Jefferson’s total numbers over these six games:

With these performances, Jefferson is now second in the NFL in receiving yards, and he is only 88 yards behind Tyreek Hill for the league lead. With the Dolphins on bye in Week 11, there’s a very good possibility that by the end of the weekend, we’ll be looking at Jefferson atop the NFL receiving yards list.

Jefferson is also back on pace for his historic 2000-yard season, He’s now averaging 117.8 yards per game, and if he keeps that up, he’ll finish 2022 with exactly 2002 yards, just squeaking past the milestone.

These upcoming weeks, the Vikings will certainly need to continue to show up in clutch moments. Minnesota hosts the 6-3 Dallas Cowboys this weekend before turning around and playing the 5-4 New England Patriots on Thanksgiving night.

After that, the games that remain include every road game against divisional opponents as well as matchups with both New York teams, who also look like playoff contenders. If Justin Jefferson continues to play as the best receiver in the NFL, we may even see him receive some MVP noise, similar to what Cooper Kupp received last year. 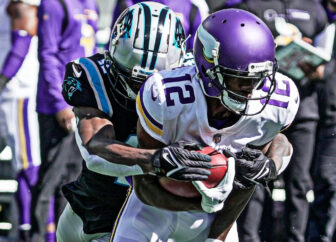