Following their victory over the Dallas Cowboys, the Green Bay Packers have added a former Vikings wide receiver to their roster. That receiver is Dede Westbrook.

Westbrook signed with the Vikings prior to the 2021 season, and the hope was that he would be able to provide a slot receiver threat to play alongside Justin Jefferson and Adam Thielen. Unfortunately, that never panned out as he never found a consistent role with the Vikings offense.

The Vikings targeted Westbrook just 15 times in their 2021 offense, grabbing 10 receptions for 68 yards. It was the lowest target load of the receiver’s career since entering the NFL.

To contrast, Westbrook was targeted 202 times over the course of the 2018 and 2019 seasons combined with the Jacksonville Jaguars. In each of those seasons, he caught 66 passes and totaled 1377 receiving yards and 8 TDs.

Special teams was the area where Westbrook contributed most for the Vikings, but even then, there was inconsistencies. There were 15 punt returners that attempted 20+ punt returns in 2021, and Westbook ranked ninth of the 15 per returned-yards average (8.3). He fumbled twice on the season as well.

With the extremely limited role, though, it’s not that surprising that Westbrook didn’t re-sign with the Vikings this offseason. Despite “weighing several offers” over the summer, per Chris Tomasson of The Pioneer Press, he has remained unsigned up until this point in the season. Overall, the sixth-year pro has recorded 170 receptions for 1788 yards and 9 TDs in 55 games.

For the Packers, they’ve been looking for reliable receivers for much of this season, especially with Randall Cobb’s injury. Despite beating the Cowboys this past weekend, Green Bay has dug themselves quite a hole in the NFC North. They remain 4.5 games behind the Vikings with a 4-6 record, and Minnesota can clinch the NFC North crown as early as Thanksgiving weekend.

While the Packers need help that this position, Westbrook won’t immediately join the active roster. Instead, he starts out on the practice squad. He joins other receivers like Jeff Cotton, Travis Fulgham, and Juwann Winfree.

Nonetheless, Westbrook could soon be an integral part of Green Bay’s offense as Romeo Doubs hits the shelf for multiple weeks with a high ankle sprain. This is the same injury that has hindered Vikings tight end Irv Smith Jr., which prompted Minnesota to trade for T.J. Hockenson.

Green Bay enters Week 11 with a 12% chance of making the playoffs, per FiveThirtyEight. Things don’t look good, but it seems that they are beginning to figure some things out on offense. They scored 31 points against the Dallas Cowboys this past weekend.

Along the way, rookie second-round pick Christian Watson had a career game, catching three touchdown passes, including two in the fourth quarter. Overall, Watson finished the day with four catches for 107 yards and the three touchdowns.

Adding Westbrook to the fold should provide another veteran weapon for Aaron Rodgers to throw to, and he can also be a punt returner after Green Bay released Amari Rodgers on Tuesday. All of that being said, it still may be too little too late for the Green Bay Packers in 2022.

The Minnesota Vikings head to Lambeau Field for a New Year’s Day matchup with these Packers in Week 17. Perhaps they will see their former wide receiver as well as former Vikings linebacker Eric Wilson. 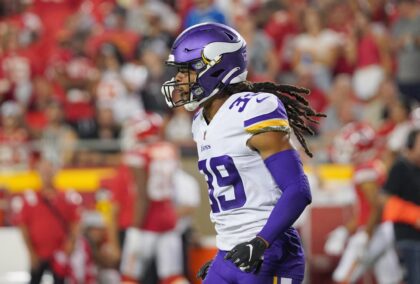 Also Read:
Veteran CB Signs with the Vikings for Second Stint of 2022