Well, the first big domino of NFL trade deadline day has officially fallen. The Minnesota Vikings have acquired T.J. Hockenson in a blockbuster deal with the Detroit Lions.

The Vikings have had a need for tight end all season long, and that need only grew with Irv Smith Jr. going down on Sunday with a high ankle sprain. Hockenson fills that need and more as one of the best receiving tight ends in the NFL.

Through seven games of the 2022 season, he has caught 26 passes for 395 yards and three touchdowns. The Lions also exercised his fifth-year option for 2023, so the Vikings have contract control of Hockenson through next season.

Hockenson is exactly what the Vikings had hoped what Irv Smith would become this year. He is an athletic tight end with sure hands, and he is adept as a blocker as well. Additionally, a 6’5 target in the red zone should be a great luxury for Kirk Cousins to throw to.

The message from the Minnesota Vikings with this move is clear: they believe that they can be a contender this season with no true leader in the NFC. Minnesota needed a presence at tight end, and they have it.

We should get to see Hockenson in action this Sunday as the Vikings head to Washington to take on the Commanders. That game is scheduled for 12 PM CST on Sunday, November 6th. 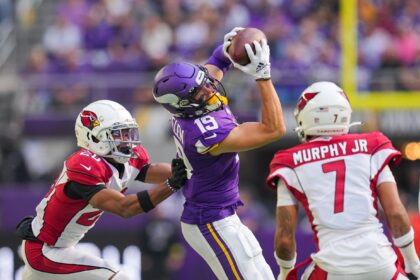