As Most Vikings Fans Dream of Kyle Shanahan, Let Me Instead Suggest Nathaniel Hackett 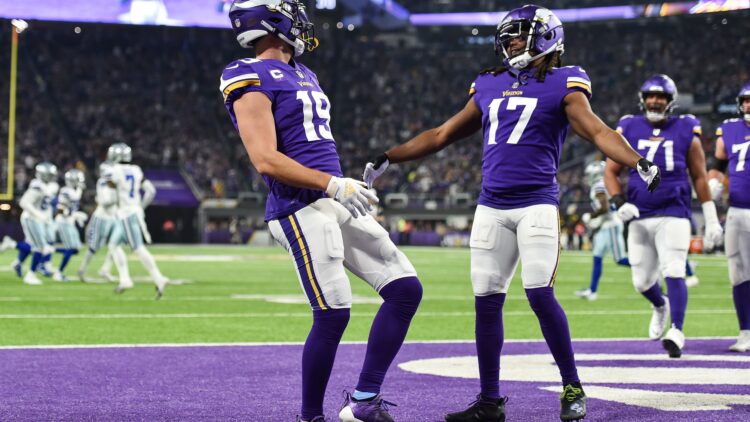 Folks, I think Hackett can hack it (sorry, I couldn’t resist). There has been an awful lot of coach chatter. To many, Mike Zimmer’s purple days are numbered, and it’s getting increasingly hard to disagree. For this reason, several have suggested that Kyle Shanahan should be at the top of the Wilfs’ wish list. I understand the appeal, especially if the team decides to stick with Captain Kirk. The issue, at least to my mind, is that Shanahan is limping to the finish line. Rather than bring in a HC who similarly failed to get the most of his roster, the Vikings should instead think about Nathaniel Hackett.

Nathaniel Hackett and The Vikings

Take a look at this video:

Does that remind you of the current coaching staff? For me, it seems like a totally different energy and approach. The Vikings really need a reset, and bringing in Nathaniel Hackett may accomplish that goal. Take a look at this Hackett quote from a Washington Post article for further evidence:

“There was a time that I wanted to be a backup dancer for Janet Jackson or Justin Timberlake or something like that,” he said. “I wanted to do that so bad.”

Or this one from a different article:

“Big fan of Austin Powers. Really enjoyed those […] And Goldmember is one of those guys that, he loves gold. And I think you’ve got to respect somebody that really loves gold. And for us, when you get inside the 20-yard line, you have a chance to score touchdowns, (if) we score, everybody gets gold. … I think that’s something that the guys have really bought into and they’ve learned to love and appreciate Goldmember and what he believes in, and we believe in a lot of the same stuff. Not the bad villain stuff but the get-the-gold stuff.”

Hackett strikes me as a down-to-earth, energetic, intelligent person. He would be a pretty radical change from Zim, someone who is brilliant with defensive football but will likely need to move onto a new opportunity soon. He can be tough to play for; the players may welcome a different approach from the HC.

Plus, Hackett is an offensive coordinator. Mike Florio has previously suggested that he would prioritize hiring an offensive coach instead of a defensive one since so many OCs get scooped up in the hiring cycle. Minnesota has had that precise issue. Pat Shurmur and Kevin Stefanski both left because they were so successful. That’s much less of an issue for defensive coordinators. Ideally, Hackett would even keep Andre Patterson in town so he can continue working wonders with the d-line and then to be the DC.

Now, I get that Hackett is currently in enemy territory, coaching the Packers and everyone’s least favorite QB. Maybe they don’t allow Hackett to interview with a division rival. If they do, Minnesota should be interested. I know that Shanahan makes sense for Cousins, but I have concerns about the way things have gone in SF. The team ought to be leaning toward one voice on offense for the next several seasons. That continuity would be massive for whoever is under center.

Green Bay’s offenses have had great success these past few seasons with Hackett as the OC. How much of a game changer would it be to have someone who could fully unlock Justin Jefferson, Adam Thielen, and K.J. Osborn? Heck, maybe he could even get Cousins to be more aggressive. Take a peak at what Henrique had to say about all of this for more info on Hackett.

Hackett Can Hack It

I just had to go back to that pun. I can’t help myself.

Hackett has had some intriguing experience as a coach. His Pro Football Reference page offers some concise, illuminating information. He has been the OC in Buffalo, Jacksonville, and Green Bay. He was the OC at Syracuse. Previously, he has been an offensive assistant, quality control coach, and position coach.

When Jacksonville was dominant in 2017, Hackett was the OC. GB has been among the league’s best offenses over these past 2.5 years; Hackett has been alongside Matt LaFleur during this time. The fact that he has been in several spots to absorb several different influences is important. He has worked for LaFleur, Gus Bradley, Doug Marrone, Jon Gruden, and Dick Jauron.

Most fans would agree that the the Vikings need a reset on their approach and identity, so Nathaniel Hackett is someone to consider. The head coach position in Minnesota ought to be a desirable one. There is a roster full of talent and arguably the best facility in the league. Ideally, Minnesota can still turn their season around, but the current trend is a disappointing one.

A new coach may be precisely what the team needs.