The K.J. Wright to The Vikings Dream Has Ended 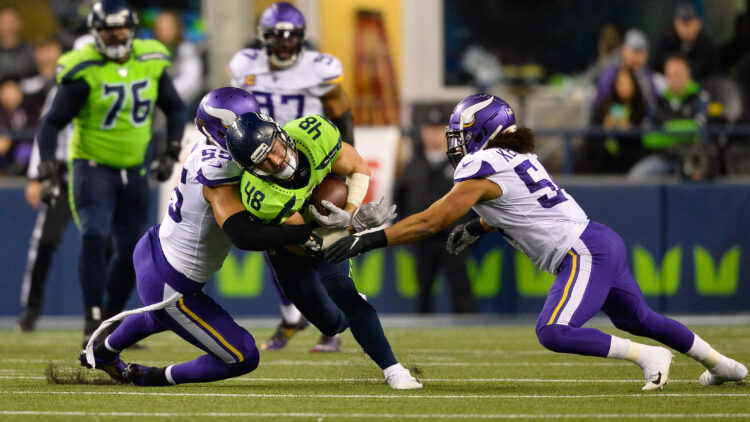 I was among those openly pushing for the Vikings to sign former Seattle LB K.J. Wright. Unfortunately, the veteran LB has opted to join Gruden and Mayock in Las Vegas. The initial reports are that he signed for a mere 1-year, $4 million dollars. It’s a bargain for a player of his ability. Even after a decade in the NFL, Wright was recognized as being one of the game’s very best players, coming in at 67th on the Top 100 list.

Not too long ago, Josh Frey wrote about how Minnesota’s LB depth was one of the keys to the season. Here is what he said about the Barr injury situation: “The Vikings were certainly looking forward to having him back this year, but hopes may be tempered for now. On Tuesday, co-defensive coordinator Adam Zimmer told reporters that he couldn’t say if Barr would be available for Week 1 in Cincinnati. This comes just days after Mike Zimmer very cryptically danced around the situation, saying that Barr was ‘dealing with something.'” Since then, there has been some optimism, but the Barr injury is concerning. We’ve been through this before with Danielle, so fans are understandably cautious.

Wright would have been the perfect replacement. Even at 32-years-old, Wright is one of the game’s best LBs. We all remember his one-handed interception on Kirk from last season’s Seattle game:

Even if Barr returns and plays all 17 games – fingers crossed – Minnesota would have had an incredible LB group. Not many teams could match up against Wright, Barr, and Kendricks. That would have been a ferocious trio. Alas, it was too good to be true.

Minnesota opted to keep 7 LBs on their roster. That’s a fair amount, all things considered. The modern game tends to favor pass rushers and coverage players, so LBs aren’t as important as they once were. The decision to keep so many LBs bespeaks Zim’s old-school mentality but also his commitment to getting better on special teams. Depth players like Troy Dye, Chazz Surratt, Blake Lynch, and Ryan Connelly are all being relied upon to tackle in the coverage units.

If everyone stays healthy, then Minnesota’s LB will be just fine. There are some warning signs, though, so making a move for Wright may have been prudent.