For the first time in a long time, there’s very little room for shuffling at the QB position. Barring some preseason miracles, it’ll be Cousins starting with Siemian backing up. It’s a far cry from the Bridgewater vs. Bradford, Ponder v. Webb, or Brooks Bollinger vs. Brad Johnson debates, as Vikings fans can sit back, relax, and know more or less what to expect from the position in 2018. Still, it’s interesting to think about what would happen in the case of preseason stunners, and who will get the 3rd QB spot (if there is one).

Siemian may be a more well-known name to those who play in deeper fantasy leagues, but to less plugged-in fans, they may have only heard of him in passing as the Broncos’ QB for most of last year. Siemian’s story is a compelling one. After bombing two Big Ten showdowns and tearing his knee, Siemian was on the cusp of taking a job in real estate and giving up on his NFL dream. But the next season, he had a renaissance, then he was drafted, had a strong preseason, and was starting on an NFL team before he knew it.

Siemian doesn’t have a shot to start this year, but has likely carved himself a lasting NFL role as a journeying backup. He is technically competing with Kyle Sloter, another former Bronco, for the second straight season. But his starting experience gives him the leg up.

Sloter earned his way onto the Vikings’ roster last season without playing a snap in purple. His preseason subbing in for Siemian (and others) in Denver was impressive enough to cause a bidding war for his talents. Sloter also nearly quit football, as many mediocre college QBs do, and wasn’t drafted. He even played three years of receiver, but was still staring at a career in finance just one year before suiting up for the Broncos.

In coming to Minnesota, Sloter functionally ousted Mitch Leidner and Taylor Heinicke for a job he wasn’t even competing for. Now, he’ll have to fend off Peter Pujals for a bona fide roster spot. Should Sloter repeat his preseason performance, he has an outside shot to challenge Siemian as the backup, but his most likely destination is as the team’s 3rd QB. If the team decides to only keep two QBs, they’ll put Sloter on the practice squad and expose him to waivers. But in the event of a QB injury, he’ll be competing to be the guy they call up.

Pujals was the first Holy Cross player to ever serve as a captain four years in a row- but the fourth only came because he broke his fibula in his senior year, leading to a 5th stint. Pujals started at Holy Cross for four years due to injury, but also leadership qualities his coaches rave about. He is a mentor for Big Brothers Big Sisters, a financial investigation intern and strong role model for his 11-year old brother with Downs Syndrome.

Pujals is a dual-threat quarterback unlike the other Vikings hopefuls, which will be about the only advantage he has. A practice squad slot would be a huge win for the Holy Cross graduate, but he does provide a boost of competition for the 3rd QB slot. It will be interesting to see what sort of offense he can show off in the 4th quarter of preseason games. If Pujals runs more than he throws, he could strip other deep roster hopefuls of opportunities with the ball in their hands. But if he excels and Sloter struggles, he could snake away that 3rd QB spot and find a foothold in his NFL career. 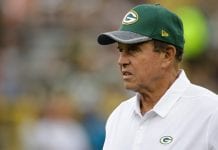