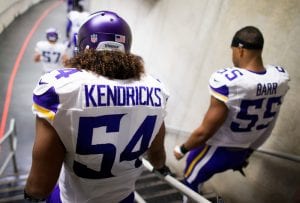 Every year, 90 football players get together, don purple jerseys and compete. Some compete to get better, to teach each other. Some compete for starting positions, or rotational snaps. Many compete for the survival of their football careers. We spend thousands and thousands of words this time of year on superstars – the players we know as household names. We go through the futile exercises of trying to predict their stats or their fantasy football values. But this is the least interesting time of year for those players.

So instead of paying attention to the mundane conditioning grinds of well-known NFL mainstays, I choose to focus on the guys with the most to lose. The players on the roster bubble, or those who limped out of college and are simply happy to have an opportunity. You may scoff at the idea of covering a player who has no chance to make the team, but in the sweltering summer months, they have the most compelling stories.

In the previous years of doing this exercise, I’ve covered every player on the 90 man roster. But a handful of those players have been written about ad nauseam over time. In an effort to avoid upstaging the “nobodies” this series is meant to focus on (as well as reduce the workload), I’ll be skipping a few players this year. These are mostly starters, or players with very little question about where they’ll end up on the depth chart. Or players who have been evaluated to death (you can find Laquon Treadwell breakdowns everywhere). Some people just don’t carry a lot of intrigue this time of year.

Here’s who that is, as well as a link to some reading on them to satisfy those who want to learn about them. I highly recommend clicking through some of your favorites – these pieces have been curated to filter out typical Rotoworld-esque blurbs with just a stat or contract info. You can get to know who these people are as people, and what they mean to the Vikings.

This page will serve as a hub post of sorts. I’ll be breaking down each position twice a week in the coming weeks, linked here as soon as they’re posted:

This is my favorite thing I do every year, so I can’t thank you enough for reading!