Welcome to the Vikings Draft Thermometer series, PurplePTSD‘s one-stop shop for all your 2023 NFL Draft needs. Throughout this series, we will be examining a number of prospects ahead of the 2023 NFL Draft, analyzing their strengths, weaknesses, what exactly their role could be at the NFL level, and most importantly, whether or not they could end up playing their first NFL snaps in a Vikings uniform. With that, let’s take a look at today’s prospect: USC WR Jordan Addison.

Jordan Addison spent the first two years of his collegiate career with Pittsburgh before transferring this past year to play for Lincoln Riley and with Caleb Williams at USC. He showcased his elite route running ability with the Trojans, and he solidified himself as one of the best wide receivers in the entire country.

The great thing about Addison is that he can get himself involved in a number of ways. He primarily played as a slot receiver, but he can be used as a ball carrier in unique run schemes and is an adept punt returner as well (averaged 15.4 yards per return in 2021 with Pitt).

In terms of pure receiving ability, he and Kayshon Boutte out of LSU are probably the most effortless movers in this class. Addison, in particular, can run any route, and he is a masterful technician with his movement. His speed and acceleration also make him a great deep ball threat.

There are a couple of difficulties when it comes to evaluating Jordan Addison. For one, he is a very slight receiver at 6’0″ and 175 pounds. For reference, DeVonta Smith, current Philadelphia Eagle and former member of the Alabama Crimson Tide, was 6’0 and 166 pounds when he entered the 2021 NFL Draft.

Not quite as small as Smith, but there will inevitably be question marks revolved around his ability to play on the outside. Addison’s small frame also calls into question his ability to handle press coverage. He didn’t have to play against those sorts of schemes very often in college, so could larger defenders get the better of him?

Finally, his 2022 season was somewhat disappointing for a player coming off a season where he averaged more than 100 yards and a touchdown per game. Despite his number of games played only dropping from 14 to 11, his receiving numbers were cut by about half. Hopefully, that doesn’t become a trend once he gets to the NFL.

Obviously, a comp of “taller DeSean Jackson” probably sounds rather appealing. It should be because Addison is a terrific player. That’s why the Vikings draft temperature stays above 50.

That being said, Addison will more than likely be off the board by the time the late-teens roll around. With some other needs for the Vikings (linebacker, cornerback, interior defensive line) all being pretty crucial, I don’t see a path for the Vikings to trade up and take a receiver when others will be available later in the round and even into the second and third rounds. 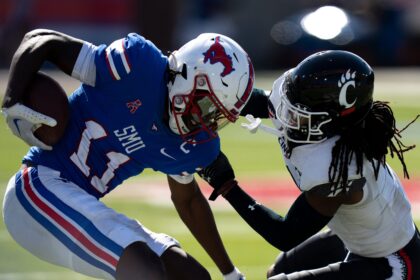