Welcome to the Vikings Draft Thermometer series, PurplePTSD‘s one-stop shop for all your 2023 NFL Draft needs. Throughout this series, we will be examining a number of prospects ahead of the 2023 NFL Draft, analyzing their strengths, weaknesses, what exactly their role could be at the NFL level, and most importantly, whether or not they could end up playing their first NFL snaps in a Vikings uniform. With that, let’s take a look at today’s prospect: SMU WR Rashee Rice.

Rashee Rice is just a playmaker when the ball is thrown his way. He plays with extreme physicality, and contact doesn’t faze him at all. Throughout the entirety of the 2022 season, everyone knew the ball was going his way a ton. He finished the season in the top five in the NCAA in both receptions and receiving yards.

His physicality also allows him to be a terrific blocker in the running game. Expect his listed weight to rise after combine as well because he plays much bigger than what the 189 pounds suggests.

Finally, Rice’s speed makes him an extremely dangerous player. He piled up yards after the catch in a number of games, and once he gets the ball, he’s always a threat to break off a big play. He’ll be highly sought after for this ability.

For all the good about his threat of yards after the catch, sometimes it can become a bad as well. Rice has a very apparent fumbling issue that popped up multiple times over the course of 2022.

Additionally, the NFL learning curve could be a concern for the early portion of his career. He played in an Air Raid offense at SMU, and he always found himself with space to work. That space will be nonexistent against most NFL defenses. It could take some time for the receiver to adjust.

We’ve been going over the wide receivers to begin this series because it’s a position that the Vikings could find themselves with a need this offseason. As of the writing of this profile, Rice is my favorite receiver for the Vikings to take if they choose one in the first round without moving up or down. He’ll likely be available, and he brings great potential to handle a workload opposite Justin Jefferson. 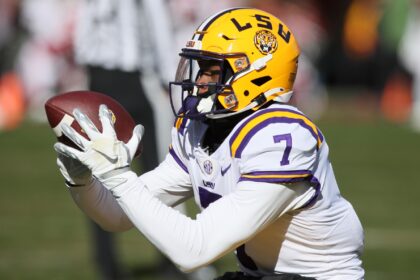