Welcome to the Vikings Draft Thermometer series, PurplePTSD‘s one-stop shop for all your 2023 NFL Draft needs. Throughout this series, we will be examining a number of prospects ahead of the 2023 NFL Draft, analyzing their strengths, weaknesses, what exactly their role could be at the NFL level, and most importantly, whether or not they could end up playing their first NFL snaps in a Vikings uniform. With that, let’s take a look at today’s prospect: Utah CB Clark Phillips III.

Despite his small size, Phillips played the majority of his collegiate career at the outside cornerback spot. I have my doubts that this will continue into the NFL, but we’ve seen players like Duke Shelley thrive as smaller CBs on the outside.

In addition to the versatility he could offer, Phillips has outstanding ball skills. He is a former receiver, and it shows on the field. He intercepted a ridiculous six passes over 12 games in 2022, and he is a threat to make a big play whenever he steps onto the football field.

Finally, he showcases extreme physicality whenever he’s on the field. Not only does he embrace contact, he goes searching for it. This makes him a threat as a blitzer as well as someone that can break up a pass at any moment in the catch process.

In a 2023 Draft class chock-full of CBs with outstanding length and size, Phillips simply isn’t that. That will limit his potential as an outside cornerback, and thus, his draft stock heading into the spring. The Utah product also needs to ensure that, while physicality can be a good thing, he doesn’t get too rough with receivers at the point of the catch. There were a couple instances where he was flagged, giving up significant yardage.

Clark Phillips III is a very popular choice for the Vikings in NFL mock drafts right now. It makes sense considering that Minnesota certainly has a need for a quality player at nickel cornerback right now, and youth in general amongst their starting defenders. It is far too early to call a prospect a “favorite” to land with a team, but Phillips likely will be picked around the time that Minnesota is on the clock. 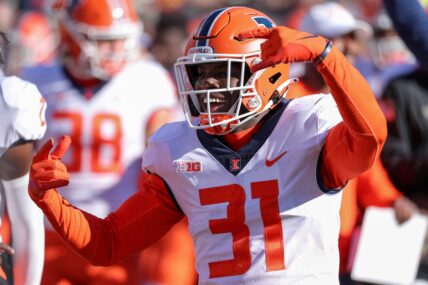