Welcome to the Vikings Draft Thermometer series, PurplePTSD‘s one-stop shop for all your 2023 NFL Draft needs. Throughout this series, we will be examining a number of prospects ahead of the 2023 NFL Draft, analyzing their strengths, weaknesses, what exactly their role could be at the NFL level, and most importantly, whether or not they could end up playing their first NFL snaps in a Vikings uniform. With that, let’s take a look at today’s prospect: Illinois CB Devon Witherspoon.

Outside of having a smaller frame, Devon Witherspooon is everything you could want out of a CB prospect. His speed and athleticism combined with extreme physicality and technically sound coverage skills allow him to play either in the slot or on the outside.

Witherspoon has a knack for sniffing out the ball, and he made multiple big plays in 2022 by using his ball skills to intercept passes. He dominates matchups at the line of scrimmage with his desire to make things physical as well.

This physicality shows up in run support as well. If Witherspoon isn’t breaking up passes downfield, he is mucking things up in the trenches with the big boys. If a wide receiver is forced to try to block him, they are no match for him as he easily sheds blockers.

The biggest knock on Witherspoon is going to be his size. There are multiple CBs projected to go around the same time as Witherspoon that weigh 200+ pounds. Meanwhile, Witherspoon is just 180. This could cause concern that he’ll be bullied at the NFL level.

In addition, he can get a little bit too handsy at times. Some of the things he got away with in college likely won’t fly in the NFL, so penalties early on in his career are somewhat of a concern. There’s also the wonder that, since he played in the Big 10-West, there wasn’t a lot of top wide receiver competition. Perhaps he comes back down to earth a little bit in the pros.

If Devon Witherspoon was bigger, he’d be a lock to become a top 10 pick in the 2023 Draft. He’s extremely athletic and versatile, but ultimately, size will likely put Christian Gonzalez and perhaps Kelee Ringo ahead of him. Either way, he’ll be off the board long before the Vikings are on the clock, unless Kwesi Adofo-Mensah works a massive trade to move up. 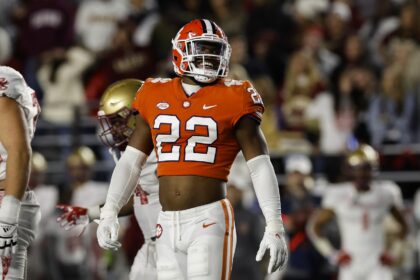