Welcome to the Vikings Draft Thermometer series, PurplePTSD‘s one-stop shop for all your 2023 NFL Draft needs. Throughout this series, we will be examining a number of prospects ahead of the 2023 NFL Draft, analyzing their strengths, weaknesses, what exactly their role could be at the NFL level, and most importantly, whether or not they could end up playing their first NFL snaps in a Vikings uniform. With that, let’s take a look at today’s prospect: Georgia CB Kelee Ringo.

If you like big cornerbacks, this is the draft class for you. One of the premiere CBs in that group is Georgia Bulldog Kelee Ringo. At 6’2 and over 200 pounds, Ringo is a dominant force with his physical prowess. The redshirt sophomore is at his best when he can play press man coverage, and he uses elite speed to keep himself draped all over any receiver.

Ringo was a state champion in both 100m and 200m in track during his high school days, so speed comes very naturally to him on the football field. His ability to keep up with elite collegiate receivers like Jameson Williams (the 12th overall pick in the 2022 NFL Draft) is very evident on his tape.

For all the upside that Ringo brings with his physicality and athletic skillset, he still has a good amount of development to go. In particular, his physical style of play can very quickly become a detriment as he gets a bit too handsy, especially at the catch point. In the games I watched, there were multiple flags for getting too aggressive with receivers that resulted in either defensive holding or DPI.

Additionally, his instincts in zone coverage could use some improvement. He’s very good in man for all the reasons listed above, but particularly in zone, he seems to have a tough time tracking both the ball and his man.

Finally, despite having some very physically imposing size on his side, there are instances where he has trouble shedding blocks. This becomes a problem when he’s trying to wrap up receivers on a screen or in run support.

If the Vikings want to go corner, there’s at least a decent chance that they could land Ringo with the No. 23 pick in the first round, especially if others go before him. However, there’s a very good chance that some team will fall in love with his great physical skills and take him earlier in the draft. If that’s the case, there should be more opportunities to take a defender that can provide immediate help in the first round or later on in the draft. 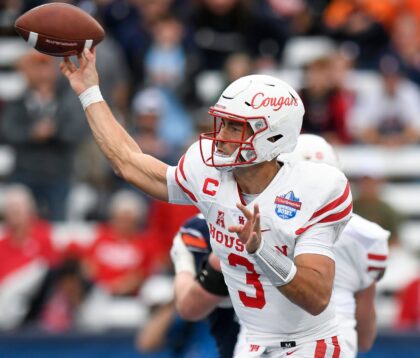