Folks, we’re back on a losing trend. Last week was not kind to the picks as we went an abysmal 2-5 in Week 9. Hopefully, we can get it back on track with the Week 10 NFL picks. Before we get into those, though, here’s a reminder of last week’s results:

The Seattle Seahawks and Tampa Bay Buccaneers are two teams that have been surprising this season, but for very different reasons. The Seahawks had been pinned as one of the worst teams in the NFL prior to season’s start, and the Bucs were expected to go on a playoff run as soon as Tom Brady came back out of retirement.

Seattle’s had an impressive start, but they are yet to have a true statement win on their resume. This could be that game as they use Kenneth Walker to run all over the Buccaneers defense that has been surprisingly bad against the run, allowing 4.6 yards per carry. If Seattle can control the trenches, they’ll come away with a win.

There are no moneylines set for this game because of the ongoing story surrounding Josh Allen’s health. If he is in fact unable to play, it will be Case Keenum going against his former team for the second time since that magical 2017 season.

As time goes on, it looks more and more likely that Allen will not play, and if that happens, it’s hard not to favor the Vikings in this game. Minnesota’s pass-rush has been ferocious with Danielle Hunter and Za’Darius Smith, and that becomes a much bigger factor with Keenum at QB rather than Allen.

This game feels like a disaster waiting to happen for the Green Bay Packers. Everything the Cowboys are great at; the Packers are terrible at. Dallas does a terrific job of running the ball, and the Packers allow 4.8 yards per carry.

Additionally, Green Bay has some injuries along the offensive line, and that should have Micah Parsons licking his chops for this game. Dallas leads the NFL in sacks on the defensive side of the ball, and Aaron Rodgers might have the Cowboy star in his nightmares.

The San Francisco 49ers are a hard-nosed, run-first football team. That becomes even more the case with Deebo Samuel available to make plays all over the field. As is the theme across the picks this week, the 49ers will find a way to control the trenches to win this game.

The Chargers allow a league-worst 5.7 yards per carry, and their game management down the stretch of these contests has been horrible. The 49ers make a big statement with a win this week.

The Philadelphia Eagles let the Houston Texans hang around when those two teams met on Thursday Night Football last week. That team is not as talented as this Commanders squad, especially with Chase Young potentially set to return to the field.

Additionally, the Commanders have been a terrific run defense this season, and the running game has been the heart and soul of the Eagles offense for much of 2022. Washington has played 4 consecutive one possession games, and while they may not win this week in Philly, there’s a great chance that their defense keeps it close. 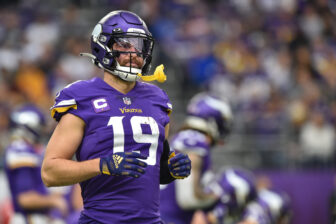 Also Read:
There Are Notable Names on the Vikings First Injury Report