Heading into the Vikings Thanksgiving game against the Patriots, one of the biggest concerns was how the Minnesota Vikings o-line would be able to stop New England’s star pass rusher, Matthew Judon. Coming into Week 12, Judon led the league in sacks with 13.0, which is already a career-high for the seven-year veteran.

The concern only elevated with the Sunday announcement that star left tackle Christian Darrisaw would miss the game. He suffered his second concussion in as many weeks during the loss to the Cowboys. Heading into that game, Darrisaw was PFF‘s highest graded offensive lineman.

This meant Blake Brandel would serve as replacement, making his first career start. The assumption going into the game was that Bill Belichick would attempt to match up Judon with Brandel for most of the night to try and abuse that mismatch.

Instead, the Vikings o-line managed to stifle one of the NFL’s best pass-rushers. Judon finished the game without a sack, and he recorded just three tackles overall. It’s just the third time this season the Patriots edge rusher has finished a game sackless, and the second time that he’s done so despite playing 80% of the defensive snaps.

This would have been an impressive performance at any point in the season, regardless of health. However, it becomes that much more remarkable when considering it was done on short rest a week after getting dominated by the Cowboys in Week 11.

Going into Week 12, the Cowboys led the league in both sacks and pressure rate after bringing down Kirk Cousins seven times, the most of any game in his career. On Thursday, Cousins was sacked just once and completed 30-of-37 passes for 299 yards and 3 TDs against one of the best passing defenses in the NFL.

Of course, part of the credit here has to go to Cousins as well. Cousins was still pressured on 15 of his dropbacks, and he remained extremely productive despite it. He completed 13-of-14 passes with under pressure for 168 yards, two TDs, and an interception. Remarkable numbers that, by themselves, would have been a solid showing for the Vikings QB. 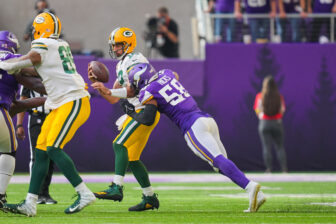