The State of the Vikings: Week 11

The State of the Vikings: Week 11

This is Episode 163 of VikesNow, a YouTube channel devoted to daily Minnesota Vikings analysis. This episode examines the state of the Vikings through 9 games.

Particularly, the win over the Buffalo Bills, Dalvin Cook, and Justin Jefferson are discussed.

The State of the Vikings

The Vikings knocked off the Buffalo Bills in Week 10, 33-30, courtesy of late-game heroics authored by Justin Jefferson, Kirk Cousins, the Vikings defense, and Dalvin Cook. O’Connell’s men circumvented a 17-point lead in the 2nd Half at a time when some Vikings fans had given up hope, particularly as the Bills led 27-10.

Wide receiver Justin Jefferson recorded 10 catches, 193 receiving yards, and 1 touchdown in a game where the phenom playmaker exuded the utmost clutch performance. He extended the game on a 4th and 18 play that will live in Vikings lore eternally.

The Vikings are one-point road underdogs at home against the Dallas Cowboys in Week 11, a team that lost to Green Bay Packers on Sunday. Dallas hopes to keep pace with the Philadelphia Eagles (8-1) and upstart New York Giants (7-2) in the NFC East.

The Packers finally won a game — the one mentioned above versus the Cowboys. Their playoff hopes remain alive with a flicker. The Vikings are the No. 2 seed in the NFC behind the Eagles and would host a home playoff game versus the San Francisco 49ers if the playoffs started today.

Ed Donatell’s defense disallowed the Bills from scoring a touchdown in the 2nd Half, yet another reason — of many — the Vikings stunned Buffalo.

A 2-6 or 1-7 record the rest of the way would plop the Vikings in the postseason. Of course, winning the division is preferred, but subpar football, as a worst-case scenario, would net a playoff berth. That’s the perk of an 8-1 start. The Vikings have a 99% probability of reaching the postseason, per FiveThirtyEight. 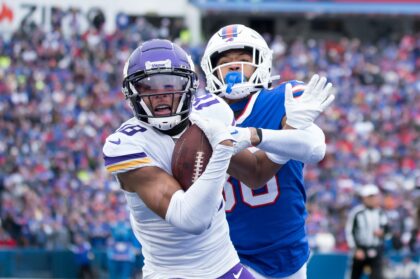 Also Read:
Justin Jefferson Is Awarded with NFC Offensive Player of the Week