Ranking the North: Where Does the New-Look Vikings Linebacker Room Stand?

There’s been a theme in recent years for the NFC North teams’ linebacker position. Each of them has had a big name in the middle, but the depth surrounding these stars is lacking. Taking a look at the Minnesota Vikings linebackers, for example, Eric Kendricks has been a consistent star. However, when he has missed time due to injury, there has never been much of an answer to replace him. After a flurry of moves across the division, here’s a little preview of how the NFC North will stack up at the linebacker position in 2022.

The Green Bay Packers may have lost Za’Darius Smith to the Vikings, but this group remains one of the strongest in the league. De’Vondre Campbell is coming off a career year in which he ranked third in the entire NFL in solo tackles and was named a first-team All-Pro. Seeing as he’s played in 16 games for each of the last five years, it seems like a safe bet that this his production will be there after inking a new deal to remain in Green Bay.

The Packers weren’t finished with the linebacker position, though. With their first of two picks in the first round of the 2022 draft, Green Bay selected Georgia linebacker Quay Walker. The former Bulldog is an explosive athlete that will help defend both the pass and the run. He couldn’t have landed in a better place than Green Bay either, learning from Campbell.

Krys Barnes has also emerged as a surprisingly good contributor after being signed as a UDFA in 2020. This is quite possibly the most talented linebacker group for Green Bay that we’ve seen in years; a scary prospect for any team looking to compete with them in 2022.

I’m not going to discuss Za’Darius Smith and Danielle Hunter very much here since we already went over their impact in the EDGE rankings. However, it must be noted that in a 3-4 defense, they likely end up as OLBs. On top of that, the Vikings linebacker room adds Jordan Hicks, someone who I have deemed as the most underrated signing of the offseason. He is a player that should greatly impact the Vikings run defense, which was one of the very worst in the NFL last season.

All this will be playing alongside Eric Kendricks, who as aforementioned, is one of the very best linebackers in the entire league when healthy. However, that is what puts Minnesota below the Packers. Over the past couple seasons, health has been a problem. On paper, this group is extremely talented at the top, but who knows how long that will last.

The promising proposition I will leave Vikings fans with is that this year is different than previous ones. Minnesota never had anyone to step up when Kendricks wasn’t available. This year, the Vikings linebacker room has talent, but it also has depth. Rookie Brian Asamoah comes to mind as a player who could step into the rotation almost immediately as a playmaker for this roster.

The Chicago Bears have a star at inside linebacker as well with Roquan Smith. However, the depth surrounding Smith is not nearly as talented as we find in Green Bay and Minnesota. Nicholas Morrow is the only real splash they made to improve this group, and even then, it’s hard to see that being much of a “needle-mover” for Chicago this season.

On top of the already limited talent, one of the few veterans remaining on this team, Matt Adams, was arrested last week for multiple misdemeanor charges of gun and metal-piercing bullets possession. It remains to be seen what the repercussions of that will be, but it only adds to the headache that has been Chicago’s spring.

Unlike any of the other teams in the NFC North, the Detroit Lions do not have a headline-type of player at the linebacker position. They tried to make Alex Anzalone the solution to that problem last offseason, but his 2021 season was absolutely atrocious for Detroit. He finished the year with a PFF grade of 35.4 in 14 games.

Jarrad Davis also rejoined the Lions after a one-year hiatus with the New York Jets in 2021. That doesn’t inspire much confidence though as he played just nine games for New York and has progressively decreased his production in each year since 2018. The 27-year-old will have to rejuvenate his career in 2022 for Detroit to have any sort of production at the linebacker position.

It’s also worth noting that the Lions are another team moving to a 3-4 defensive format for the 2022 season, so we shall see if that has any impact on their linebacker play this year. 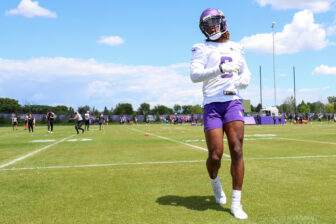