Yesterday, we went through six positive Vikings stats heading into their bye week. Being 5-1, there are certainly plenty of positive signs for this Vikings squad. However, this Minnesota squad is far from being the best in the league as-is. Here are six equally concerning Vikings stats through the first six weeks of the 2022 NFL season.

First and foremost, the Minnesota Vikings must get better at converting third downs. Especially as the season wears on and the weather gets colder, it’s going to be harder to move the ball through the air on early downs. For the Vikings to maintain their terrific start, a third-down conversion rate of 38% probably won’t get it done.

Last week in particular, the Vikings offense did a terrible job of maintaining drives, forcing Ryan Wright to punt 10 times. Luckily, Minnesota’s defense stepped up to force three turnovers and put constant pressure on Teddy Bridgewater and Skylar Thompson. If the Vikings had played Josh Allen on Sunday, as they will in just a few short weeks, the outcome likely is very different.

This is the area of the Vikings that continuously has gotten bashed on a weekly basis. It’s less concerning as long as the Vikings continue to allow fewer than 20 points per game, but if teams start putting up more points in the coming weeks, the Vikings passing defense will come under much more fire.

Through six weeks, the Vikings are allowing 272 passing yards per game, which is the fourth-most in the NFL. They allowed 385 passing yards to the Miami Dolphins this week. The only teams ahead of them are the Tennessee Titans, Atlanta Falcons, and Pittsburgh Steelers. These teams have combined to go 8-9 through the first six weeks. Things must improve with teams like the Arizona Cardinals and Buffalo Bills on the schedule later this year.

The Vikings defense has done a good job, particularly this past Sunday, of recording sacks. However, this has come despite an inconsistent rate of pressure. Through six weeks, the Vikings have the 12th worst pressure percentage in the NFL, per Pro-Football-Reference.

This simply should not be the case when stars like Danielle Hunter and Za’Darius Smith are on the team. Of course, Smith has certainly lived up to the hype surrounding him coming into the season, but it’s been a very quiet season for Hunter.

Hunter broke out a little on Sunday, recording a sack for the second consecutive game and his third for the season. Additionally, Patrick Jones broke out with a pair of his own sacks in replacement of D.J. Wonnum. Coming into that game, Jones hadn’t recorded a sack in his entire NFL career. Perhaps he can be a spark plug for the defense throughout the rest of the year.

“G-Money”, as special teams coordinator Matt Daniels has called Vikings kicker Greg Joseph, has been anything but money in recent weeks. After earning the NFC Special Teams Player of the Week Award in Week 4 against the Saints, Joseph has missed important kicks in consecutive weeks.

On the season, Joseph’s field goal percentage has dipped below 70%, sitting at 69.2% (9-of-13 overall). He’s been solid from under 50 yards, but after showing off his leg throughout training camp and preseason, Joseph is just 1-for-5 on kicks of 50+ yards. Last season, he made 7 of his 9 kicks from that distance. Additionally, he’s already missed a pair of extra-point attempts this season.

Of course, Vikings fans are far too familiar with kickers breaking down in key playoff situations. It’s needless to say that Joseph needs to get these kicking woes figured out soon.

Part of this next stat revolves around the Vikings inability to convert on third downs, but Minnesota needs to do a better job of winning the time of possession battle this season. So far this year, the Vikings are losing the TOP battle by an average of nearly two minutes per game. They are eighth worst in the league, holding the ball on average for just 29:05 per game.

This poor stat got worse on Sunday as the Vikings held possession of the ball for just 24:31 against the Dolphins, the second lowest TOP in the league for the week. The only team worse than that was the Carolina Panthers. They held the ball for 22:55 on Sunday and took a 24-10 loss to the Rams. Again, looking at some of the numbers, it gets very confusing how the Vikings beat the Dolphins on Sunday.

Moving forward, the Vikings play some very good QBs over the closing stretch of the season. In order to beat them, the best strategy may be to simply keep the ball out of their hands. To do so, they’ll need to string together long drives that end in points.

Assuming the Vikings don’t jump out to substantial early leads in every game for the rest of the season, they’ll need to play sharp second half football to remain competitive. Luckily, as we discussed yesterday, their fourth quarter offense has been one of the best in the league.

That said, their third quarter offense has been horrendous for the entire season. Through six weeks, they’ve scored six total points in the third quarter this season. One point per game for an entire quarter won’t win too many games. The only team that performs worse in the third quarter right now are the Denver Broncos, and we’ve seen multiple times on primetime how well that season is going.

A big reason behind this simply lies in the fact that they haven’t been on the field much during the third quarter. Part of that has to do with poor offensive efficiency, as discussed above, but the defense also has to do a better job of getting opposing teams off the field. To this point in the season, the Vikings offense has held the ball for just 42.7% of the third quarter, fifth worst in the NFL.

Overall, the Vikings have played strong football heading into their bye week. They have certainly benefited from some lucky situational football in order to get to 5-1, though. They need to clean up some of the things mentioned above if they are going to remain on pace for one of the highest playoff seeds in the NFC. 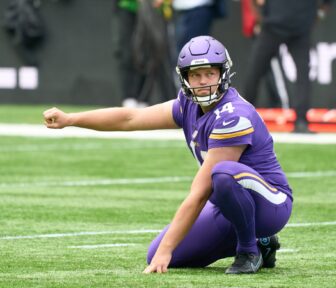