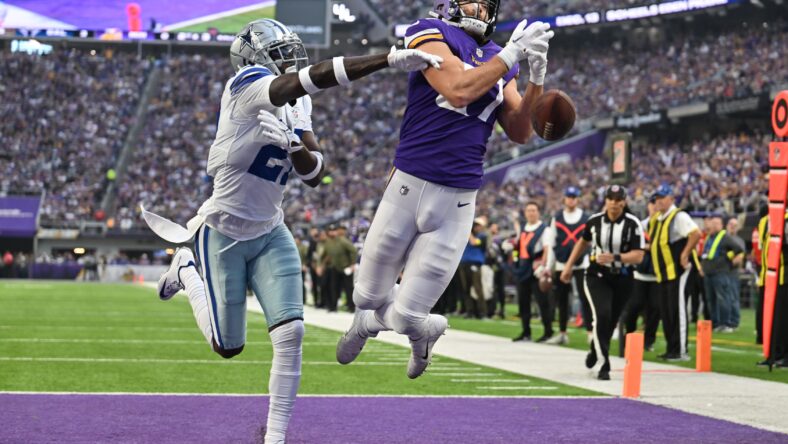 We’re nearly two-thirds through the NFL regular season after this weekend’s slate of games, and now we are in the midst of the ultimate football weekend: Thanksgiving. As we approach the holiday, here is the list of Week 12 NFL power rankings; one in which the Minnesota Vikings take a tumble from the top spot.

Patrick Mahomes did what he does best, and that is win road divisional games. He’s now 14-0 in such games throughout his career, and once again, he did it with another last-minute touchdown drive to seal the deal against the Chargers. Isiah Pacheco seems to be emerging into a lead back as well.

Coming off their disappointing home loss to the Washington Commanders in Week 10, the Eagles almost had another equally disappointing loss on the road in Indianapolis. The Colts took them down to the wire, but Philly emerged victorious after a two-minute drill TD.

The Dolphins no longer hold sole possession of first place in the AFC East, but they now get a matchup against the Houston Texans after their bye. Miami remains one of the most potent passing offenses in the entire NFL, but the rest of their schedule holds multiple big tests.

The Cowboys couldn’t have played better on Sunday. Dak Prescott played one of his best games as a pro, Micah Parsons dominated Minnesota’s o-line, and the Cowboys got terrific production from both Ezekiel Elliott and Tony Pollard in the backfield. This was a statement victory after a disappointing loss last week.

Buffalo got back on track this week, beating the Cleveland Browns to move into a tie for first place in the AFC East. Josh Allen was healthy enough to start with his elbow injury, but it seemed that the Bills were much more cautious with him this week than last. Instead, they relied on James Cook and Devin Singletary for much of their offensive production.

The biggest problem with this Baltimore Ravens team has been finding ways to get stops on the defensive side. It cost them victories against both the Bills and Dolphins early in the year. However, in their last two games, they’ve now allowed a total of 16 points. Granted, it would have been nice for the offense to do a better job of holding up its end of the bargain against Carolina. A win is still a win, though.

Remember when we all thought the reign of King Henry may be coming to an end? Well, the Titans running back continues to put those theories to rest with another 100-yard performance on Thursday night.

I take full responsibility for the Vikings coming out flat this week because of what I did in last week’s power rankings. In order to make up for it, I may have overcorrected the Vikings placement this week. Either way, that was an ugly showing on Sunday.

Much like last year, the Bengals have surged back into playoff contention due to their offensive production. In four of their last five games, Cincinnati has scored 30+ points as they continue to keep pace with the Ravens.

The 49ers bulldozed their way to another victory on Monday night against the Cardinals. If they keep playing like this, there are few teams that can handle the firepower that this offense brings.

It’s official; every team in the East divisions now sit above .500 through 11 weeks. The Washington Commanders have joined the party with another win, their fifth in six games. Taylor Heinicke has turned this team around for the better since being inserted into the starting lineup.

New England has now held opponents to three or fewer points on three separate occasions this season, including each of their last two games. The defense has done a terrific job of stifling opposing offenses, and now they ride that momentum into Minneapolis for a Thanksgiving night matchup with the Vikings.

The Jets offense is quickly becoming a glaring problem, especially with Zach Wilson as the QB. They are 5-2 in the seven games Wilson has started, but they’ve been held under 25 points in five of them. Luckily, New York’s defense remains one of the strongest units in the NFL.

The Seahawks may have lost in Munich prior to their bye, but this remains one of the most surprising teams in the 2022 NFL season. Now in Week 12, they host the Las Vegas Raiders, one of the biggest disappointments of the year.

The New York Giants have not won a game by two possessions yet this season, and they are the only team with 6+ wins without such a victory. That seems a bit concerning, and a double-digit loss against the Detroit Lions at home doesn’t help things.

The Chargers may have lost to the Chiefs, but they proved that they belong in the conversation with arguably the best team in football. Their schedule gets easier over the next two weeks, so expect them to begin stringing some wins together.

The two teams directly behind the Bucs in the NFC South each won this past weekend, so the division has begun tightening once again. Even still, Tampa looks like a much different team than the one that lost three-straight games just a month ago.

Cordarrelle Patterson is officially the king of the kickoff return as he scored his ninth career return TD on Sunday during Atlanta’s win. The defense made a key stop at the end of the fourth quarter as well to seal the victory.

The Lions have now won as many games in November as they did throughout the entire 2021 season. Now, Detroit gets to host three consecutive games, so there’s a decent chance we get to see even more wins in the near future.

No Kyler Murray meant the Cardinals offense couldn’t find much of a rhythm against a talented San Francisco defense. However, it doesn’t help when their own defense had no answers for the 49ers offense, either.

Jacksonville likely is out of the running for the AFC playoffs, but the improvements can be seen both on offense and defense for this Jaguars squad. Perhaps they can get on a run to end the season.

Aaron Rodgers declared the Green Bay Packers as “not dead” after Week 10’s comeback victory over the Dallas Cowboys. However, this loss to the Tennessee Titans may officially be the final nail in the coffin.

Jeff Saturday’s Colts almost pulled off an improbable victory against the Eagles, but in the end, Philly pulled away with a two-minute drill TD towards the end of regulation. Still, Saturday has this team competing at a higher level than they were early in the season.

Pittsburgh’s offense has begun to come alive following their bye, recording over 350 total yards of offense in back-to-back games for the first time this season. However, their defense had no answers for Cincy’s offense this week.

Don’t be fooled by the final score; the Browns trailed by as much as 28-10 halfway through the fourth quarter. Jacoby Brissett got some nice garbage time stats to make the loss look better, though.

The Saints maybe without Michael Thomas for the rest of the 2022 season, but this was one of the more complete offensive games they’ve played all year. Now, they have back-to-back games against playoff teams to try and reassert themselves into the picture.

The Super Bowl champs look like they are going to miss out on playoffs in 2022 after another loss. If so, they would become the 10th Super Bowl champion that fails to make the playoffs the following year.

If there was ever a team that could get the Raiders out of their slump, it would be the Denver Broncos. Vegas put up 400 yards of offense for the first time since Week 7 and got a victory to take them out of the AFC West basement.

The circus show that is the 2022 Denver Broncos continues, and to cap off one of the more disappointing weeks of the season, they have officially released RB Melvin Gordon.

Strides continue to be made by Justin Fields as a QB, but when Chicago needed him most, he was unable to lead a game-winning drive to knock off Atlanta. He’s certainly not helped by the current state of the defense, either.

The Panthers seem to be remembering that they no longer have Chrisitian McCaffrey, and this was the worst showing we’ve seen from their offense all season. They recorded season lows in points, total offense, and rushing yards on Sunday.

If Houston wants to find a new QB next spring, they just need to keep losing games the way that they are. 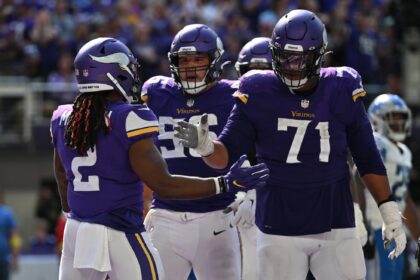