The tight end shuffle continues for the Minnesota Vikings into Week 11. Less than 24 hours after their outrageous victory in Buffalo against the Bils, Kwesi Adofo-Mensah was back at work. On Monday afternoon, the Vikings sign another TE. That tight end is former Jacksonville Jaguar, James O’Shaughnessy.

The 30-year-old tight end joins the Vikings practice squad this week in the midst of his eighth NFL season. He was a fifth-round selection in the 2015 NFL Draft by the Kansas City Chiefs where he played his first two seasons.

During that time, O’Shaughnessy’s role with the Chiefs was largely limited to special teams. He played in just 223 offensive snaps during those two seasons, and he was targeted 12 total times by QB Alex Smith. He caught eight of them for 86 total yards.

During the 2017 NFL Draft, O’Shaughnessy was traded to the New England Patriots along with a sixth-round pick, and in return, the Chiefs got a fifth-round pick. He would never suit up for the Patriots in a regular season game, though, and he was waived prior to the 2017 regular season’s start.

That’s when the Jacksonville Jaguars claimed O’Shaughnessy off waivers, and his career began to blossom. In his first season with the Jags, the newly claimed tight end played in all 16 games and caught 14 passes for 149 yards and his first career touchdown.

O’Shaughnessy also started two of the three playoff games as the Jags made an improbable run to the AFC Championship Game. During that playoff run, he caught a pair of passes for 23 yards.

In 2018, he followed up his first season in Jacksonville with an even better showing, piling up 24 catches for 214 yards. He made a career-high 19 starts as well. However, that’s when problems began occurring.

His 2019 season got off to a strong start as O’Shaughnessy caught 14 passes for 153 yards and a pair of touchdowns in Jacksonville’s first five games. However, during that Week 5 games against Carolina, he tore his ACL which forced him to miss the rest of the season.

2020 ended up being a nice bounce back year for the tight end, as he started 13 games and caught 28 passes for 262 yards. However, injuries again showed up in 2021, and O’Shaughnessy played just seven games last season.

In all, the seven-year career for O’Shaughnessy has been filled with ups and downs, but he’s totaled 112 receptions for 1108 yards and three touchdowns in 80 games. He should provide some decent depth for the Vikings as well at a position where Minnesota needs it.

Nick Muse was elevated from the practice squad for the third time in Week 10, meaning that he cannot be brought onto the active roster anymore. With Ben Ellefson still trying to make it back from IR, O’Shaughnessy is a veteran presence to keep around until he is ready to return as TE3. 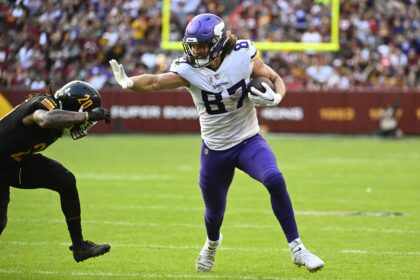 Also Read:
Somehow, the Vikings Open as Underdogs in Week 11