Somehow, the Vikings Open as Underdogs in Week 11

The Minnesota Vikings are coming off a win in what was arguably the most exciting game of the entire NFL season. Now, they get to head home for three consecutive games, and the first of these games comes against the Dallas Cowboys. These very Cowboys just blew a 14-point lead to the Green Bay Packers and lost 31-28 this week. Even still, the Vikings open as underdogs in Week 11 for this game.

As of Monday, the Cowboys are two-point road favorites over the Vikings. Usually, a home team is favored by three points in a matchup that is between two teams of near-identical talent. In this case, Vegas appears to believe that the Cowboys remain the superior team in this matchup.

Despite the Vikings thrilling victory this past weekend, there may be a couple reasons for this. Overshadowed by this win is the fact that the Vikings came out of this game riddled with injuries.

Cam Dantzler is on IR, so he won’t be playing in Week 11. Additionally, Dalvin Tomlinson missed his second consecutive game on Sunday, and his status remains in question against the Cowboys. During the game, Minnesota also lost both Christian Darrisaw and Akayleb Evans to concussions.

The Vikings secondary depth could be in danger if both Dantzler and Evans miss Sunday’s game, and Darrisaw has been one of the best left tackles in the entire NFL this year. Minnesota may run into trouble at these spots against Dallas’ passing defense. Blake Brandel played well in place of Christian Darrisaw this week, but Micah Parsons gives any offensive line fits.

Finally, history suggests that teams coming off emotional wins like the Vikings often underperform the following week. Coming off such a high, Minnesota could very easily let down on Sunday against the Cowboys.

Taking all of this into account, it makes more sense that the Vikings are slight underdogs, especially this early in the week. If we find out that some of the players get healthy as Sunday gets closer, expect this line to move. Ultimately, though, the more this team can stay under the radar, the more dangerous they will become. 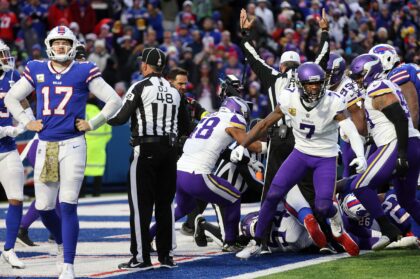