How Dire is The Vikings Corner Conundrum? 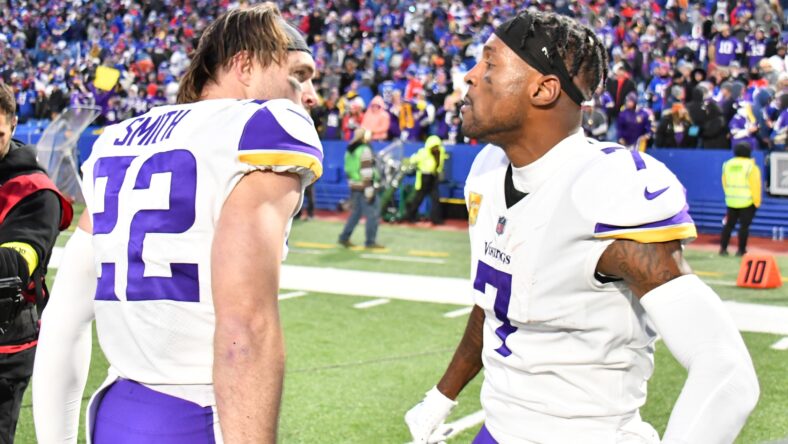 At present, the Vikings corner conundrum is at the forefront of many fans’ minds.

Patrick Peterson has been excellent in 2022. Currently, he is the 5th-best corner on PFF. Given his age – he’s nearing 33 – it’s a remarkable ranking. He has played 98% of the defensive snaps and has done so at a high level. QBs are completing less than 59% of their passes into his coverage; they have an 84.7 rating when targeting the veteran. So far, Peterson has 3 INTs and 12 PDs.

The concern rests with what’s occurring opposite the seemingly ageless Peterson. Cameron Dantzler is a great run defender and has had some strong moments in coverage, but he is on the IR. Two rookies – Akayleb Evans and Andrew Booth Jr. – are the next options. Unfortunately, both are navigating their own injury concerns. Neither is available for tonight’s contest.

At Vikings Territory, there was some discussion of the Vikings corner issue. Take a look at how Dustin Baker discusses the matter:

Already battling the second-worst passing defense in all of football via passing yards allowed (267.3 per game), the Vikings must now manage a litany of injuries. And that’s down the line on the CB depth chart, starting with Cameron Dantzler.

Not too long after, Dustin notes that Duke Shelley is likely to get the start if the two rookies can’t fill-in for Dantzler. Shelley received some opportunity in the Buffalo game, and he impressed with a critical PBU.

One thing that has been noticeably absent, though, is some discussion of Kris Boyd. The 2019 7th-round selection isn’t the world’s best corner. Nevertheless, he’s been in town for a little while and has some playing experience. He has started in 6 games in his career. Currently, Boyd has 2 snaps on defense. Otherwise, he has been really involved on special teams.

At times, Boyd can struggle in coverage, but he’s an excellent tackler. I can understand if Ed Donatell thinks that Shelley gives Minnesota a better shot at winning, but perhaps we’ll see Boyd find his way onto the field.

What we have, then, is a depth chart that has a legit CB1 – Peterson – holding down one side of the field. Our expectation ought to be that he’ll play at a high level, making it difficult to target him in the passing game. On the other side, Donatell will likely need to turn to Shelley or Boyd. Otherwise, practice squad players like Parry Nickerson or Tay Gowan are options.

Finally, we might also consider what a three-safety defense looks like. Perhaps Chandon Sullivan could kick outside, leaving Josh Metellus to slot duties. The Josh Metellus/Camryn Bynum/Harrison Smith safety trio could plausibly hold down the fort for a week.

The Vikings corner problem will likely present some issues on Thanksgiving. Bill Belichick is a brilliant strategist, so one has to assume he’ll plan on targeting the corner opposite Peterson with regularity. Unless that corner shows he’s capable of making plays, Belichick will probably instruct his offense to keep targeting Minnesota’s depth player.

The Dallas game is one that the Vikings and their fans would like to forget. Putting together a decisive win against arguably the greatest coach of all time – especially given the connection between Belichick and Kevin O’Connell – would go a long way in reassuring fans that Minnesota is legit. The Vikings corner position certainly offers some reason for concern, but there are ways to overcome these issues.

Look for O’Connell to try to keep the offense on the field by committing to running the ball. Look for Matt Daniels to find ways for the special teams to keep giving the Vikings good field position. Perhaps most importantly, look for Donatell to finds ways for his edge rushers to get after Mac Jones, thus allowing the secondary to avoid needing to cover for too long.

A victory tonight would push Minnesota to 9-2.

Editor’s Note: Information from Pro Football Reference and PFF helped with this piece.