Kellen Mond Gets a Fresh Start

On their way towards trimming their roster down to 53 players, the Minnesota Vikings cut both Sean Mannion and Kellen Mond on Tuesday morning. This move was expected after they traded with the Las Vegas Raiders to acquire Nick Mullens. Sean Mannion is expected to sign with the Seattle Seahawks whereas Kellen Mond will get a fresh start with the Cleveland Browns.

Cleveland is obviously in a very precarious situation at QB in 2022 with the suspension of Deshaun Watson for the first 11 weeks. In his stead, Jacoby Brissett projects to be the Week 1 starter when the Browns take on the Carolina Panthers.

Behind Brissett it was the battle of the Joshes as Josh Dobbs and Josh Rosen fought to be QB2 while Watson is away from the team. Rosen was released on Cleveland’s cutdown to 53 players, so Dobbs appeared to win that competition.

Dobbs is similar to Mond in that he has never started an NFL game, despite being in the league since 2018. He spent the 2018 and 2020 seasons with the Pittsburgh Steelers, appearing in six games. In those games, Dobbs completed 10-of-17 passes with 45 passing yards and an interception.

Mond on the other hand has only appeared in one regular season games for the Vikings, and he played just three snaps of that game. Throughout this preseason, Mond has shown flashes with the Vikings, but his inconsistent decision-making ultimately landed him on waivers. It remains to be seen which of Dobbs or Mond will suit up in Carolina to backup Brissett. Meanwhile, the Vikings remain with just two QBs on their roster in Kirk Cousins and Mullens. 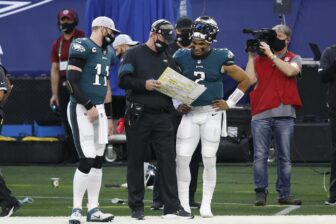