The NFC North Round-Up: All Squared at 1-1 Heading into Week 3

As the dust settles from a Week 2 slate of games that can only be described as flat-out goofy, perhaps the funniest part of all these wild games is that, essentially, none of it has mattered in the NFC North. Through two games, the NFC North teams are all squared at 1-1, creating a four-way tie in the standings.

Because of their win over the Packers, technically the Vikings have the lead going into Week 3, but it’s still certainly a four-horse race. As we look ahead to Week 3, here are the latest takeaways from each team in the division.

The Bears Are Frisky

I know what the scoreboard said at the end of Sunday night’s Bears/Packers game. Green Bay won by 17 points, 27-10. That said, it really could have been a lot worse for the Bears.

Chicago actually made some key plays on defense, and their rookie CB Kyler Gordon had a very nice showing throughout the game. Safety Jacquan Brisker had a few busted coverages, but he showed flashes too.

On offense, the Bears strung together enough plays to come away with more than 10 points. Between silly mistakes from a young team, and some strange playcalling decisions, they have multiple things to clean up on that side of the ball.

All-in-all, the Chicago Bears are not going to roll over against any team. Their opponents are going to have to make plays in order to beat them.

When the Lions traded for Jared Goff, the assumption seemed to be that he was simply a placeholder until Detroit found a QB that they wanted to take in the draft. So far into 2022 though, it seems like there might be a different plan in place.

The former Rams QB was at his best in LA when he had a great situation around him. Sean McVay created unique schemes, Goff had a number of receiving weapons, and his offensive line did a great job of protecting him.

Looking at Detroit’s roster, they’re not straying too far from this path that led the Rams to a Super Bowl appearance. Both of D’Andre Swift and Amon-Ra St. Brown are emerging as top-10 players at their positions, and the Lions already boast one of the best offensive lines in the entire NFL. If the defense can mold itself into a top-15 group, the Lions aren’t too far away from competing for a playoff spot.

The Packers Chemistry Is Still a Problem

Green Bay notched their first game into the win column on Sunday night, but things remained ugly at times. Especially on offense, there were a number of miscommunications between Aaron Rodgers and his rookie receivers.

One such mishap came as a snap that hit Christian Watson while he was coming across the line of scrimmage. The miscommunication nearly caused a disastrous turnover that would have set the Bears up on Green Bay’s side of the field.

Overall, this lack of chemistry is not entirely unsurprising as the Packers try to regroup post-Davante Adams. That said, if these problems continue into Week 3, it could make playing an already tough Tampa Bay defense that much harder. After losing to the Vikings in Week 1, they can’t afford to lose more ground in the NFC North this week.

Heading into the Minnesota Vikings Monday night matchup, the biggest concern for me was Ed Donatell’s concerning past when facing mobile QBs. Those fears proved true as Jalen Hurts absolutely torched Minnesota’s defense for 390 total yards and a trio of touchdowns.

Compounding the problems on defense was an offensive scheme that seemed much less dynamic than the one that dominated Green Bay’s secondary. Kirk Cousins threw three picks. Meanwhile, Justin Jefferson and Adam Thielen were held in check, and Dalvin Cook established nothing in the running game.

Moving forward, the defense should continue to hold strong against pocket passing QBs, but future matchups against Josh Allen and Kyler Murray look even more intimidating coming out of Monday night. The redeeming quality for Minnesota is that they control their own destiny. After defeating the Packers in Week 1, they hold the tiebreaker lead in the NFC North moving into a matchup with the Lions. 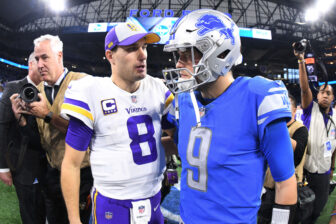