On March 16th, 2020, seismic shockwaves were sent through the NFL landscape when Stefon Diggs was traded from the Minnesota Vikings to the Buffalo Bills. Along with Diggs, the Bills also received a seventh-round pick that was used on defensive back Dane Johnson, who has played a total of eight games over the course of his career with Buffalo. In return, the Minnesota Vikings received a 2020 first, fifth, sixth, and a 2021 fourth. The most prominent of those picks is of course the 2020 first rounder, which turned into Justin Jefferson.

Since the day of the Vikings made that pick, the two wide receivers have been constantly compared, and wouldn’t you know it, Justin Jefferson and Stefon Diggs are essentially the same player two years later. At the end of the day, this transaction is largely seen as one of the few times where a trade is a win for both teams. Diggs is the proven WR1 that the Bills and Josh Allen needed to become a championship-contending squad, and the Vikings found a cheap, talented wide receiver which has allowed them to use their salary cap elsewhere.

It’d be easy, and honestly quite fair, to just wrap things up there and chalk it up to a draw. However, there is still one more piece to this puzzle, and 2022 could be the year that puts the final nail in the coffin containing this beaten, dead horse of a topic.

The second season of Justin Jefferson’s career was certainly a terrific follow-up to his record-breaking rookie campaign. Because of that, he’s become a favorite receiver to put at the top of multiple rankings. He recorded the second-most receiving yards, 1616, and the sophomore was one of just six players to record 1000+ receiving yards and 10+ receiving TDs. Pretty impressive numbers for the Vikings wide receiver in just his second NFL season, and it seems extremely plausible that he could continue to progress even further.

Even if Jefferson is just comparable to his 2021 season, he could surpass Stefon Diggs’ career receiving total over his Vikings tenure. Currently, Jefferson has the 18th-most receiving yards in Vikings history; 1607 yards behind Diggs who is ninth. It’d take another massive season from Jefferson; in fact, a season that would rank 22nd all-time in terms of single season receiving yards. As audacious as that is for many receivers, Jefferson is simply good enough to put that type of effort forward.

Not only is he capable of topping Diggs’ receiving yardage total, but continued development as a red zone threat could mean Jefferson will threaten Diggs’ receiving touchdown total. This lack of presence was the only knock that could be made on the Vikings receiver as a rookie, but he slowly chipped away at it during 2021. As things stand in May 2022, Jefferson has hauled in 17 career TDs, tied for 20th in Minnesota Vikings history. Diggs again sits at ninth overall with 30 scores.

13 touchdowns is a lot to ask of Jefferson, especially with Adam Thielen on the squad. However, if he is to officially take over the reins in the Vikings receiver room, becoming a perennial scoring threat is the final step.Another incredible season from Jefferson would only further hammer home the point that Minnesota was the true winners of the Diggs trade as well.

The fact that Justin Jefferson will even threaten Stefon Diggs’ career totals in year three is incredible. Remember that before being traded, Diggs spent five seasons in Purple and Gold. He played 70 regular season games and started 63. Assuming Jefferson starts all 17 games in 2022 (hold on while I search for some wood to knock on), he will finish the 2022 regular season with 50 games played and 48 starts.

It will take until at least Week 3 of the 2024 season for Jefferson to reach his 70th regular season game played with the Vikings, and by that point (again, quickly knocking on wood), he projects to blow past Diggs production if he just keeps the same pace that he’s set over his first two NFL seasons.

Obviously, it’s not breaking news or a flaming hot take to suggest that Jefferson is already one of the best receivers in the NFL. However, I would implore all of you reading this to just make the short trip over the Pro-Football-Reference and just take a gander at where the Vikings wide receiver ranks, not only in Minnesota history and lore, but in the NFL in general. The numbers are mind-boggling and form yet another reminder that we are watching history before our eyes on a weekly basis. It’s a very stereotypical phrase for me to close this soliloquy on, and I apologize in advance, but please Vikings fans, don’t take Justin Jefferson for granted. 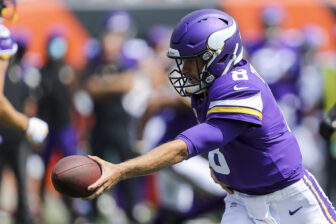