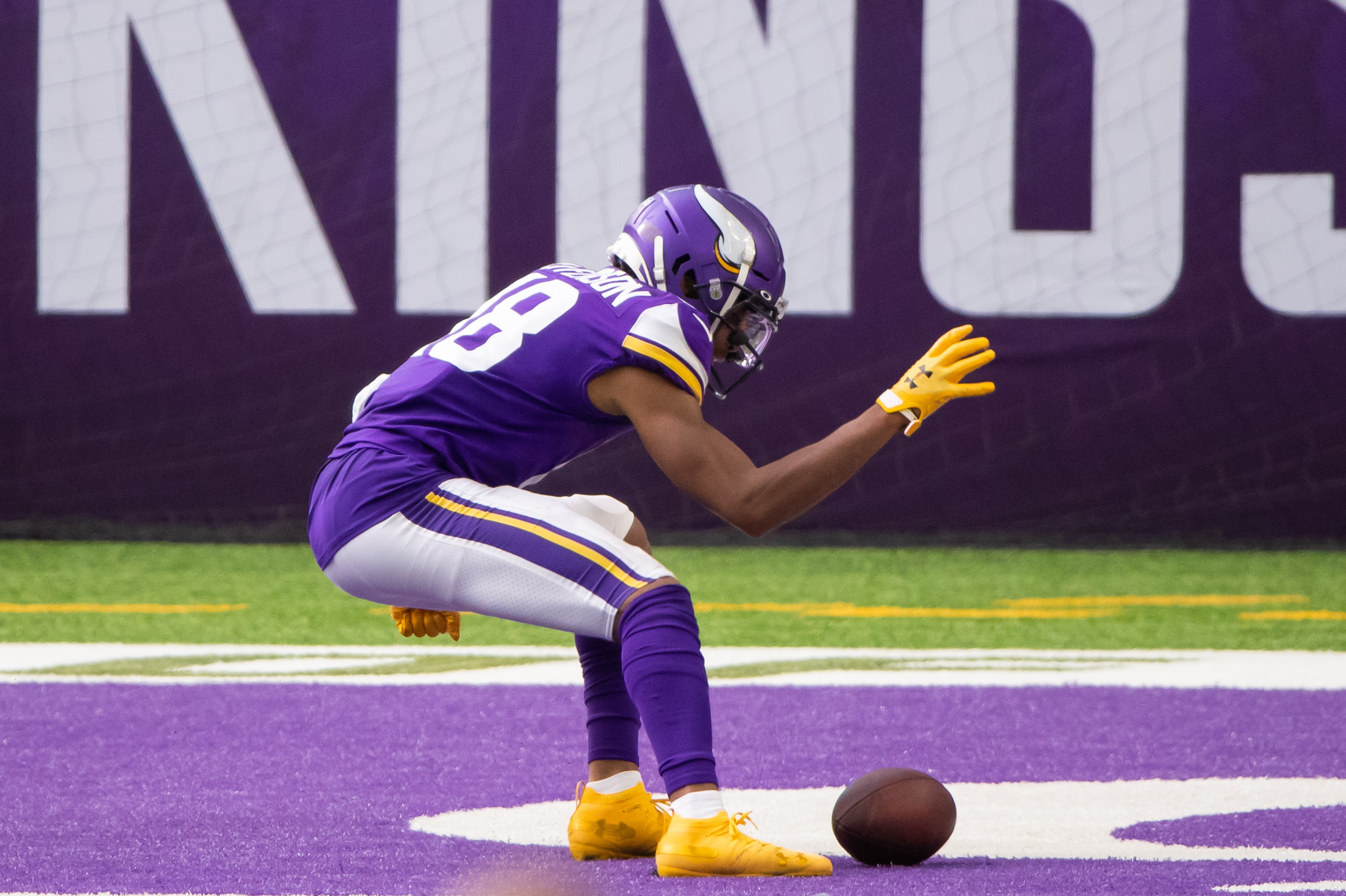 Throughout his football career, Justin Jefferson has done nothing but prove doubters wrong. After a historically great 2019 season for the LSU Tigers, he was dubbed as exclusively a slot receiver. It seemed many forgot that Justin Jefferson played as an outside receiver in 2018 when he led the Tigers in receiving yards and touchdowns. Then, after not being listed as a starter for his first two NFL games, he proved to his own coaching staff that was a mistake. Through 26 games as a pro, Jefferson has left very little reason to doubt him.

Since last year against the Tennessee Titans, the young star has reminded us that it doesn’t matter where he lines up; Jefferson his going to get his. He could line up in the slot, outside, even in the backfield, and he was going to find ways to make plays. There was one final straw that remained, though. It’s been one that was easily hidden by the likes of Dalvin Cook and Adam Thielen, but a critique nonetheless. Of course, I am speaking of the red zone.

Justin Jefferson led Minnesota in targets, receptions, and receiving yards during an outstanding 2020 campaign. However, he was relegated to a very minor role down inside the 20. The rookie had 12 targets down there, but just six receptions made it an inefficient share. The efficiency continued to shrink as the Vikings approached the goal line. Jefferson caught just two balls inside the 10. He was targeted eight times. For reference, his teammate Adam Thielen, caught 11-of-13 targets inside the 10-yard line with 10 TDs.

Again, it’s a minor issue when you have a historically great performer across from you, but if Jefferson ever wanted to truly be WR1, this is an area he’d need to learn to dominate. Spoiler alert: he has done just that in 2021. As Jefferson has done with every challenge he’s been presented, he took it head on and has excelled.

Through 10 games this season, he has matched or exceeded nearly every red zone stat from a year ago. He has the same number of targets (12) and TDs (4), and already has more receptions (7). His 67 yards are also ninth in the NFL among wide receivers. In fact, his targets, yards, and TDs all rank among the top-11 of all WRs.

Remember, this is a guy whose “weakness” has been this area of the field. Remember that Davante Adams fellow in Green Bay that everyone likes to call the best receiver in the league? He has just seven more yards, three more targets, and one more touchdown than Jefferson in the red zone. If we want to keep using national narratives, Adams also has had the advantage of Aaron Rodgers throwing him passes rather than the inferior Kirk Cousins. All in all, Jefferson has proven once and for all that he has no real weakness in his game.

Some Credit to the Vikings Coaches

This is an unpopular thing to do right now, but some of the credit for Jefferson’s improvements have to be given to the Vikings coaching staff. As much as Jefferson has improved his own skills, the Vikings have set him up to succeed. This was evident in the win over the Green Bay Packers this past week. Jefferson had a fabulous day, recording a slashline of 8/169/2 in the 34-31 thriller.

Of course, the biggest plays came in the open field for Jefferson as they always will. That said, I want to focus on one play in particular that came midway through the third quarter. The Vikings were on their opening drive of the second half, driving down the field. However, the Packers defense had managed to bottle up the Vikings offense on first and second downs with goal-to-go.

Minnesota was in need of a big play from the GB 9 in order to take a two-score lead, so what did they do? Naturally, they brought their star receiver into the backfield. Off the snap, Jefferson ran an option across the middle, Cousins hit him wide open in stride, and Jefferson all but walked into the end zone for the score.

It was Jefferson’s first career NFL reception out of the backfield, but it was not a play that he is unfamiliar with. Apparently, the Vikings are taking some pages out of the LSU offense that made Jefferson successful because he said he ran that exact same play for the Tigers.

Jefferson’s talent on its own is fantastic, but the Vikings have done a great job in recent weeks of putting him in positions to succeed. If Minnesota is going to make their run to the playoffs, they are going to need to continue finding ways to get their stars the ball, and that includes Justin Jefferson. These types of plays should have Vikings fans excited for what this group has drawn up for this week’s game against the 49ers.