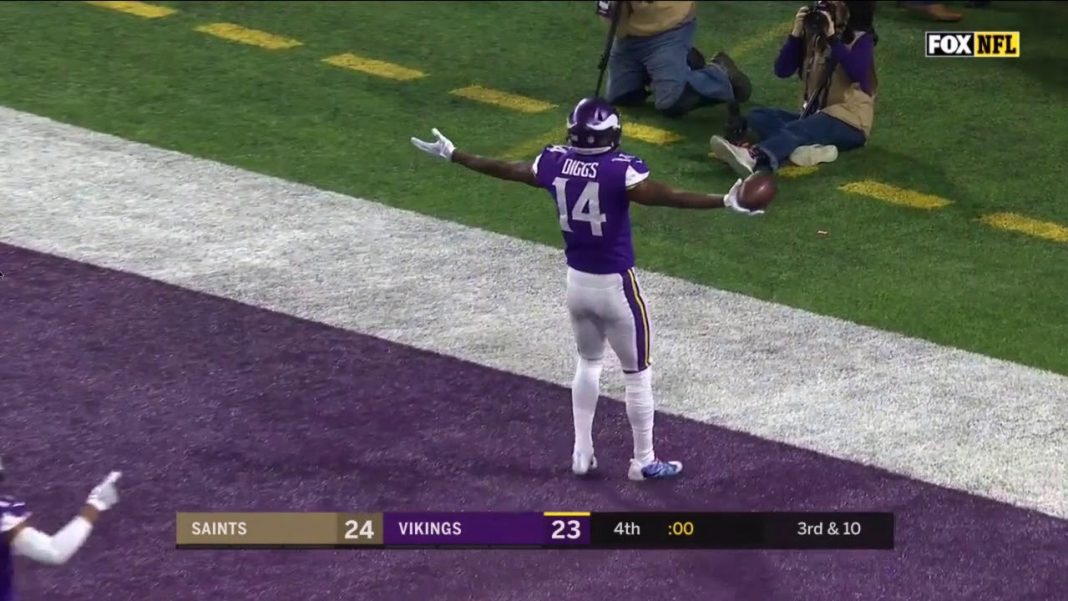 When the Minnesota Vikings traded mercurial wide receiver Stefon Diggs to Buffalo for, at least by NFL terms, a King’s ransom it was widely presumed that the Vikings would use one of their two first-round picks on a wide receiver to replace Diggs. According to BleacherReport.com’s Matt Miller and his 2020 NFL Draft Scouting notebook, that may not actually be the case.

Let’s hop right into what he said

MINNESOTA: With two first-rounders, the Vikings are heavily expected to draft a wide receiver early, but I continue to hear this might not be a Day 1 priority. In a historically deep receiver class, there is a belief among league insiders that the Vikings could wait for a receiver and attack the defensive and offensive lines in Round 1.

If anything has ever outlined the difference between fan expectation and team plans or actions, this may be it. While some in the fan/talking head community may scoff at the Vikings not picking up a receiver in the first round, it’s actually a relief that that may end up being the case (assuming that Miller isn’t being played (in a spycraft sort of way)), for a couple of reasons.

First, the Vikings under Spielman haven’t had the best results when they’ve drafted a receiver in the first roun… Really before the fifth round (or undrafted free agents). Whether or not we’re talking about Spielman as the Vikings’ general manager or as part of the ‘Triangle of Authority’ that he, current vice president of football operations, Rob Brzezinski, and either Brad Childress or Leslie Frazier, Spielman has had a pretty god awful track record of drafting wide receivers.

Last week I covered that legacy (in part) on this site in an article titled ‘Assessing Rick Spielman’s Legacy So Far: Part 1 – The First Round Picks’ and while that article is about all of his first-rounders (and not necessarily solely the wide receivers), it did give a preview of the second part of that series, which is about… You guessed it, wide receivers.


Let’s take a look at the receivers drafted by Spielman and company (with their draft round being in parenthesis):

So, the first-round receivers are Laquon “What are Thumbs” Treadwell, Cordarrelle “The More I Smile the Less they’ll Realize I can’t count Yards” Patterson, and Percy “I got 5 on it!” Harvin. Not the greatest group, even if you include the trade haul that the Vikings received for Harvin from the Seahawks (which netted them Xavier Rhodes who had a few great seasons with the Vikings but also essentially fell apart physically before turning 30).
The second rounders? Sidney “President of the Brett Favre Fan-Club” Rice?

He had a great year in 2009, but like the aforementioned Rhodes, fell apart after injuring his hip in the 2009 NFC Championship Game against the Saints (yet another reason the Vikings would’ve lost their fifth Super Bowl against the Colts that year (as despite his toughness, it’d have been hard for him to play. They also would’ve been down Cedric Griffen, as well. Lastly, they’re the Vikings, so…)). Rice refused hip surgery the following off-season, as he felt that the surgery would negatively affect his performance.

Despite going through with that surgery three weeks into camp (keeping him out until Week 10 of the 2010 season), he never recovered and was allowed to walk after the 2011 NFL lockout to join, of course, the Seattle Seahawks. Rice may be the best receiver drafted by Spielman, as the rest are a hodgepodge of busts and at best, practice squad players. That is until the Vikings drafted Olabisi Johnson in the 7th-round last year.

The Vikings have a tremendous amount of needs elsewhere on this roster and while losing a skill player of Diggs’ impact does seem a lot more important than, let’s say, drafting a more “boring” (or less splashy) player like an interior offensive lineman or any of three openings on the Vikings’ defensive line. As of the writing of this article, though, the Vikings have a non-depth need at corner, defensive tackle(s), defensive end, left tackle, left guard, right guard, and wide receiver. That means that of the 22 positions on offense and defense, the Vikings have needs at 8/9 positions, which is about 36% – 40% of their roster.

That sounds like something… Um… I can’t think of the name… Ugh, this is so frustrating!

It’s on the tip of my tongue… Rhymes with REBUILD.

While I clearly think that it makes sense for the Vikings to focus on other positions, I do fear that because head coach Mike Zimmer is essentially a glorified defensive coordinator (as he has both put the defense ahead of the offense in the draft over the years, as well as essentially given his carousel of offensive coordinators carte blanche) he will utilize both first-round picks on a corner and defensive end, then the second-or-third-round pick on a receiver (to placate the fan base (despite what I said about the difference between expectation and what the team does) and much, much less importantly Gary Kubiak (I’m being sarcastic)).

What’s so wrong with that?

Well, the Zimmer/Spielman era has been one with tremendous potential but if there’s been on constant that we can point to as to why this team hasn’t reached that potential, it’s been the offensive line. The best example of this is 2016 when the team went into their Week 6 Bye 5-0 with recently acquired quarterback Sam Bradford at the helm. Unfortunately, because the team hadn’t really invested enough through the draft on the offensive line, instead of hoping that their patchwork group of over 30, injury-prone, free agent acquired offensive lineman would not do what over 30, injury-prone, free agent acquired offensive lineman do.

Spoiler alert: They did.

The ONLY way I’d feel even remotely comfortable with giving Zimmer and Spielman an extension beyond 2020 is if they show that they’re going to rebuild this team the right way. Considering the fact that the Vikings’ line was 27th-“Best” in the NFL (according to PFF) in 2019 at pass blocking, but had some semblance of optimism on the right side of the line (mainly in terms of their run blocking, but compared to the left side of the line they did make fans and writers feel like perhaps the Vikings finally had something to build on with their line).

Then they cut right guard Josh Kline to save under $1.5 million.
It was that move that shook many on Vikings Twitter to their core. That made this feel less like a calculated rebuild (trading, cutting or letting walk dead weight to amass both salary cap space and draft picks) and more of an unmitigated disaster. We’ve already seen what the peak of this team was and will be if they ignore the offensive line and let Zimmer essentially build the (position-by-position) defense of his dreams. It’s called 2019.

So, let’s hope that if they aren’t going to use one of their first day picks to replace Diggs’ production, let’s hope that they use it to help quarterback Kirk Cousins in another way. Word is that they might resign Kline, a move that’d then make it so the team could perhaps draft a left guard or tackle.
While some may balk at drafting an interior lineman in the first round, they did just that in 2019 with center Garrett Bradbury. If they were able to find a Day 1 starter at left guard, they could then flip Riley Reiff and Brian O’Neill, as Riley Reiff (as former Vikings line and head coach Mike Tice said on my show, Morning Joes, after the 2019 season, said) is a right tackle, not a left one.

While some fear flipping O’Neill, he’s already shown a tremendous ability to pick things up quickly. He went from a two-to-three-year “project” to someone who gave up ONE sack in his rookie season. Putting Reiff back at his natural position may make him incredibly over-paid, but it’d then give the left side of the line some of the promising results we saw on the right side and a right side that with Reiff and Kline, a much more promising unit than we’ve seen.

Or this could be smoke. But considering the fact that Spielman has swung and missed three times now in the first round when drafting wide receivers, let’s hope that Miller’s source(s) are telling him the truth.