What’s the deal with Kyle Sloter? 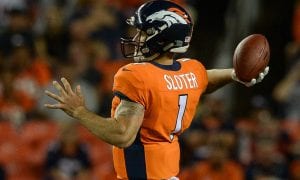 It feels like every few years, there’s a Quarterback hidden deep in the depth chart in Minnesota that a few fans rally around and proclaim the Messiah. In the 2015 pre-season, a certain door-kicking young man by the name of Taylor Heinicke set hearts racing around the state within a mere 82 passes (57 completed). The Heinicke-hype train started, and some were convinced he was the QB of the Future, ready to stand in and lead the team to glory. Of course, he never even ended up starting a game for the Vikings. True, the man now has a 100% career completion rate in the regular season with the Houston Texans (is one pass too small a sample size?), but the way some were convinced of his future greatness was unusual to say the least.

Fast-forward to 2018 and there’s another unknown QB developing a cult like following in Minnesota – Kyle Sloter. The 24 year old out of Northern Colorado certainly looks like a prototypical NFL quarterback, standing at 6-4 and 220lbs. After playing only one year of QB in college, he flashed talent after being picked up undrafted by the Denver Broncos. In the 2017 preseason, he completed 31 his 43 attempts for 413 yards, three touchdowns and no interceptions. Clearly, the Vikings liked what they saw, offering him $20 000 a week to be on their practice squad – far beyond what your standard practice squad player would be offered. They also moved him into the 53 man line up during the back end of the 2017 season to ensure he couldn’t be poached by rival teams. It’s these two things combined that are used as evidence by Sloter fans to show that the Vikings are convinced he is something special.

So, is there a chance that Sloter can be developed under new Offensive Coordinator and QB whisperer John DeFillippo into an NFL starting caliber signal-caller, or is this merely another infatuation with the unknown that is bound to fizzle out soon? Let’s take a look at the very little footage we have of Sloter in the NFL – the preseason of 2017.

Sloter’s strong frame and height give him a cannon of an arm, and allow him to hit both tight spaces and the deep ball with relative ease. His throwing motion in fact reminds me quite a bit of Sam Bradford’s. Check out the below footage from a preseason game against the Chicago Bears in August last year. Needless to say, his WR is wide open but still, Sloter drops the ball 50 yards with little to no difficulty.

Likewise, this dart from the same game is highly impressive, especially because Sloter doesn’t even really step into this throw.

In terms of raw arm talent and physique, Sloter ticks these two boxes with no question marks. He seems exceptionally comfortable and accurate on timing routes, particularly over the middle of the field. He hits crossing routes and slants with no troubles, and there is plenty to like on his limited tape.

Sloter also has a great ability to keep his eyes downfield during extended plays. While this could potentially be problematic at times in the NFL if a 275 pound lineman is about to demolish him, it is encouraging that he doesn’t panic when his first read isn’t open or when he has to move outside of the pocket. This play is a great example of Sloter looking downfield and eventually completing an unlikely pass as he scrambles towards the sideline.

Here’s another one against the Cardinals where he’s able to successfully find his receiver after keeping his eyes downfield even while rolling towards the left sideline.

All in all, there’s a lot to like about what we’ve seen on tape from Sloter, and it’s apparent why some are so fond of him and optimistic about his future.

Of course, it’s not all positive when viewing Sloter’s limited body of work – nor would you expect it to be for someone so raw. It’s important to remember that Sloter has played very few snaps at the position in his career. But it’s important to also acknowledge there were some highly questionable throws in his single pre-season, and if he’s going to compete for a starting gig at some point, he’ll have to take plays like these out of his arsenal. In this play, he seemingly doesn’t see the safety that really should have intercepted this throw. Not only is it an inaccurate throw, but it’s also a poor decision.

This safety Sloter took was unnecessary, and gave me visions of Case Keenum v Pittsburgh in terms of retreating deeper when under pressure instead of stepping up and giving his o-line a chance. Not that it was great blocking by the RT, but Sloter should never have allowed a safety on this play. There’s actually numerous examples in his preseason tape where he takes a sack, when there was plenty of opportunity to simply dump the ball off or throw it away, and it’s something he’ll have to work on.

It’s exciting that the 2018 preseason will allow us to see how Sloter has developed, as we won’t have seen him throw a ball for 12 months by that point. The sample size we have of him in the NFL preseason is simply too small to make too many conclusive claims. We know he’s got a good frame. We know he has a decent arm. We know there’s plenty he needs to work on. Here’s hoping we can add to the list of things we know about Kyle Sloter in a few months time. One thing is certain – the Vikings staff and coaches have seen a far greater deal of Sloter than we have, and they seem to be pretty invested in keeping the young man around, so maybe he truly will be one to watch.