Trae Waynes has been a controversial figure ever since his disastrous Hall of Fame Game performance two years ago. Even before that, many wanted the Vikings to instead procure Marcus Peters in the draft, a cornerback who’s inarguably had a better career than Waynes. There’s a lot of reason to worry about his development as a cornerback, considering his shaky rookie season and compounding it with his seeming inability to get out from behind geriatric veteran Terence Newman. While Newman’s prominence in the defense isn’t necessarily a bad thing, it’s temporary at best. It’s time to evaluate what the Vikings have in Waynes, and what we can expect when he inevitably takes over the full-time role.

Before getting deeply into Waynes analysis, we need to address the biggest narrative driver: his snap counts. Waynes fell behind Newman in snaps from the get-go, only participating in 18% of the defensive snaps in his rookie year and 56% in his sophomore year. At first glance, this is concerning- a team that’s not willing to start its first round draft pick over a veteran in his high 30s should speak volumes. But don’t let Terence Newman’s age fool you. Newman played out of his mind in 2016, and wasn’t just “good for his age.” Newman led the league in yards per cover snap (essentially a ‘yards per attempt’ but converted to cornerbacks). He was only second to Richard Sherman in cover snaps per reception. Only those two and Patrick Peterson averaged 14 or more snaps between allowed receptions. Newman was a top-ten YAC preventer on a per-snap basis and a top-15 run stopper. Put simply, Newman’s performance was elite- with Rhodes shadowing the studs, Newman chewed up and spit out WR2s all season. Newman could have been the CB1 on a high number of teams, so putting Waynes on the bench behind him is hardly an indictment.

Conversely, the fact that Waynes sat out for half of the season’s snaps may seem like a reason to hold off- after all, we’ve hardly seen what he’s capable of. But per PFF, Waynes played 366 coverage snaps, and that’s plenty to evaluate him on. Waynes showed streakiness in 2016 and an inconsistent set of skills. Let’s break that down.

On average over the season, Waynes allowed 1.35 yards per cover snap (59th) and allowed a reception every 8.7 cover snaps (67th). Those numbers compare with those of Artie Burns, Jason McCourty and Logan Ryan- viable CB2s, but certainly replaceable. Waynes, however, was an elite preventer of yards after the catch giving up the 8th-best 2.93 yards after the catch per allowed reception. This will come in handy, particularly with the YAC-heavy nature of the division rival Detroit Lions. So Waynes comes out as a solid second cornerback- someone who won’t singlehandedly lose you the game, but may have trouble with the upper echelon of wide receivers. But these are season averages, which can miss out on some of the nuance of a season as it progresses. Lining up Waynes’ yards per cover snap game-by-game (excluding games with fewer than 10 cover snaps) tells a story of inconsistency. 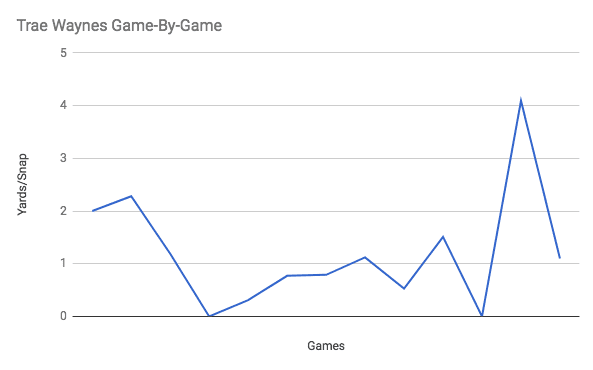 While Trae Waynes ranked near the back end of startable cornerbacks in aggregate, his game-by-game performance tells a much different story. Waynes had some staggering performances on both ends of the spectrum- in week four against the Giants, Waynes was only targeted on two of 24 snaps, allowing neither to be caught. In week 14 against the Jaguars, Waynes took 14 coverage snaps without a single target.  In week 10 against Washington’s litany of weapons, Waynes only allowed two catches on six targets. While Waynes was targeted the 4th most often on a per-snap basis, he wasn’t picked on every time he hit the field. Waynes logged a three-game streak with 12 or 13 cover snaps but only one or two targets, which would be elite if it weren’t such a small sample size. Grains of salt, and so on.

For every shimmering peak, Waynes fell to disastrous lows. He started the season abysmally, getting targeted every three or four snaps in the first two games and giving up catches on roughly 60% of those for 184 yards and a touchdown. His game-winning interception in the stadium opener was a memorable end to a truly dismal stretch of play, but “Bad Waynes” returned. Aaron Rodgers got his revenge on Waynes in week 16, connecting on all four attempts to target him for 90 yards and a touchdown. In the Thursday Night loss to the Dallas Cowboys, Waynes gave up his worst non-Packers performance, allowing 7 of 13 targets to be caught for 68 yards and a touchdown.

While Waynes has a penchant for covering deep, he struggled the most against mobile quarterbacks who are capable of extending the play with their legs- Mariota, Prescott and Rodgers. Against quick-shot strategies like what the Giants attempted in week 4, and to a lesser extent, Blake Bortles in week 14, Waynes excelled. It’s when the play breaks down that Waynes becomes a liability.

It’s worth noting that as a run stopper, Waynes was a reasonable asset to the Vikings’ defense, ranking 31st out of 94 qualifying cornerbacks in efficiency. That said, he only participated in 188 of the rushing snaps, but three run stops (i.e. tackles that cause a down & distance disadvantage) for a cornerback is pretty good. Per PFF, he was only credited with a single missed tackle throughout the entire season.

So as the schedule develops in 2017, keep an eye on Waynes during the two Packers games, as well as the Buccaneers, Panthers, and possibly Browns contests to see if he’s developed a more proficient ability to defend extended plays.

As Terence Newman ages and possibly changes positions, Waynes will be pushed to the forefront of the Vikings’ secondary. What he’s shown in the last two years allows us to set our expectations, and highlight areas we can hope for improvement.