The Vikings got embarrassed at home by the visiting Green Bay Packers. Not much went well for the Vikings as they were dominated in every phase of the game, except the red zone defense, which served as one of the only bright spots.

The Vikings were counting on Jaleel Johnson and Shemar Stephen to man the middle of the defense, and they got off to a terrible start. The Packers did whatever they wanted on offense, and they were met with little to no resistance. Ifeadi Odenigbo, the heir apparent to Everson Griffen, left much to be desired by his performance. Yannick Ngakoue,  the new addition to the team, was thrust into a starting role too early due to Hunter’s injury. This line will be without Hunter the next two games, so they will need the entire defensive line to play much better.

There was a lot of optimism surrounding the Vikings wide receiver room with the addition of rookie Justin Jefferson. As the game wore on, it seemed they missed Stefon Diggs in a big way. They struggled to separate from the Packers’ corners, and they were  unable to make plays in one-on-one situations. Thielen was able to do what he usually does, but everyone else has to play better in week two.

The game was already stacked against Mike Zimmer with Hunter being out, but his defense was pitiful. While a lot of it can be attributed to the offense’s lack of time of possession, Rodgers and Packers moved the ball with little resistance for the entirety of the game. The Redzone defense was impressive, but everything else left a whole lot more to be desired. Zimmer has a lot of work to do before the next game to get that young defense ready to compete at a much higher level.

The Vikings offensive line was not as bad as many fans thought. After a rough start they were able to hold up in obvious passing situations during the attempted comeback. This is a big accomplishment given the amount of pressure Cousins faced in the two matchups against the Packers last season. Next week they face Deforest Buckner and a Colts defensive lineman that didn’t look too good against the Jaguars.

When given the opportunity, Cook ran well against the Packers’ defense. He recorded two touchdowns and averaged about four yards a carry, but the offense’s inability to sustain drives early led to them passing more down the stretch. It’s encouraging to see Dalvin still being hard to tackle and making the offensive line look good after being paid.

The Packers could not cover Thielen, but that was expected. An ugly throw early from Cousins slowed down his production, but he still managed over one hundred yards and two touchdowns. He picked up where he left off after torching the Saints secondary in the wild card round of the 2019 playoffs. 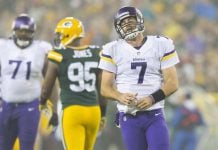