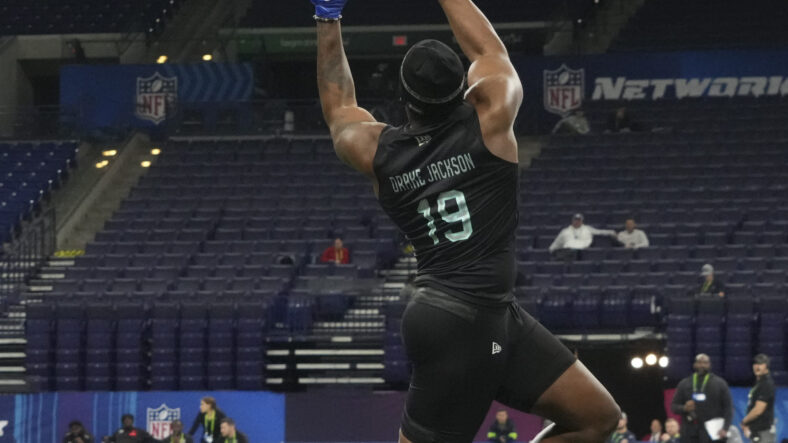 In 2019, Drake Jackson burst onto the scene as one of the top pass-rushers in the PAC-12. From his very first game against Fresno State, his athletic burst off the line and his ability to maneuver around opposing tackles was something to behold. As a freshman, the USC Trojan placed among the top-10 in the conference for both TFLs and sacks.

Now following the 2021 season, Jackson is poised to become the first USC EDGE selected in the first round of the NFL Draft since 2015. Could he also break a longer streak by being a first-round EDGE pick by the Minnesota Vikings for the first time since 2005?

When talking about Drake Jackson, you have to start with his athleticism and versatility. He’s reported to have run a 4.5 40-yard dash while at USC, and his tape suggests the same. The speed to outrun a ball carrier at 250-260 pounds is alarming, and for that alone, he should be considered amongst the best in this class.

That versatility is what truly puts him over the top, though. Jackson played the majority of his snaps at defensive end in 2019, but the past two years, he’s taken a lot of snaps at outside linebacker. There shouldn’t be any question that he would be comfortable taking snaps at either position in the NFL. Defensive coordinators love to try to disguise their blitz schemes, so teams should be drooling at the prospect of taking him in the mid-first round.

Finally, Jackson has proven he can overcome adversity even just in his three-year USC tenure. 2020 in particular was a difficult year for the defender. Ahead of that season, he lost 20 pounds because of illness, and that weight loss likely played a large factor in his move to OLB. Combine that with an already strange season due to the pandemic, and it could have been enough to take production down. However, Jackson said to hell with all that, and for the second consecutive year, he was named to the second-team All-PAC-12.

For all the strengths in Drake Jackson’s game, there’s a reason he isn’t considered to be in the same tier as Kayvon Thibodeaux or Aidan Hutchinson. The biggest reason for this? Missed tackles. Honestly, upon watching some of Jackson’s games, it seems like his already gaudy stats could have been two-fold if he was just able to finish plays more often. He has all the talent to disrupt plays in the backfield, but he just lets too many ball carriers slip from his grasp.

He certainly got better at this in 2021, so some of these issues may just be adjusting his angle of attack. It makes sense that this would feel a little weird after adjusting so suddenly from DE to OLB, and a full offseason of being able to prep at that OLB position seemed to help. Not to mention, he didn’t have to endure a summer of illness and adjusting to a much lighter frame. I would expect these tackling issues to improve.

Would Drake Jackson Fit on the 2022 Vikings?

The Vikings have a lot of uncertainty facing their roster/staff this offseason. They’re already in the process of finding a new head coach and GM, and once that is complete, we should see where the new group wants to take this franchise. One of the biggest uncertainties is the future of Danielle Hunter. The Vikings have gotten very little production out of their star over the past two seasons, and they could save over $18 million by off-loading that contract.

However, that brings up the issue of depth at the EDGE position as well as OLB with Anthony Barr likely being off the roster as well. Drake Jackson could fit beautifully into that Vikings defense at either of those spots. As of now, I’d say OLB would be more likely with the emergence of DJ Wonnum and Kenny Willekes, but nothing should be off the table at this point. Especially if Minnesota can swing a trade to get another first-round pick, Jackson should be heavily considered at No. 12.