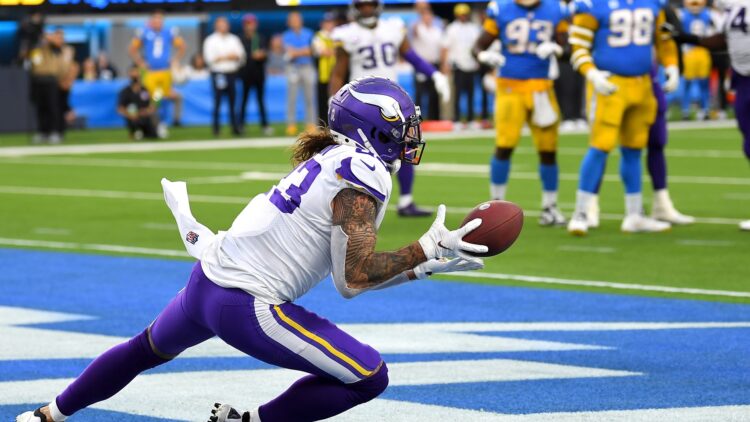 Nov 14, 2021; Inglewood, California, USA; Minnesota Vikings tight end Tyler Conklin (83) catches a pass in the end zone for a touchdown in the second half of the game against the Los Angeles Chargers at SoFi Stadium. Mandatory Credit: Jayne Kamin-Oncea-USA TODAY Sports

Vikings tight end Tyler Conklin didn’t need to stretch the field last Sunday when Minnesota took on the LA Chargers. But inside the Chargers’ 5-yard line, Conklin came up with two of his biggest catches of the season. Because of this, Conklin is our first repeat Unsung Hero on the season after the Vikings escaped from LA with a 27-20 victory.

The first big catch of Conklin’s day came near the end of the first half. Following Eric Kendricks‘ spectacular interception, the Vikings offense marched down to the Chargers’ 5-yard line. On 2nd-and-5, Kirk Cousins dropped back on a five-step drop. Conklin ran a five-yard “in” route, sitting down between two LA defenders. Cousins fired a bullet to Conklin to give the Vikings a 13-3 lead with 3:26 remaining in the second quarter.

After the Vikings found themselves in a 17-13 hole late in the third quarter, Mike Zimmer got aggressive after a 65-yard drive stalled at the Chargers’ 1-yard line. Facing 4th-and-goal, Conklin motioned to the right side of the offensive line. At the snap of the ball, Conklin began to run across the middle with Chargers All-Pro safety Derwin James trailing him. Backup tackle Blake Brandel was running the same route from the opposite side of the formation, creating a “rub” route that caused his trailing defender to collide with James. This left Conklin wide open for the go-ahead touchdown with 2:33 left in the third quarter.

The three catches for 11 yards wouldn’t appear to be a career game for unsung hero Tyler Conklin. But it was the first two-touchdown game of his NFL career. Pro Football Focus credited him with a 64.1 pass grade, good for fourth-best among all Vikings skill position players.

Conklin hasn’t been the dynamic playmaker that fans expected to see from Irv Smith, Jr heading into the season. But Conklin has been steady, catching 35 passes for 353 yards and four scores through nine games. His 10.1 yards per reception is on par with his 10.2 career mark, showing consistency with increased snaps. With Justin Jefferson continuing his ascension to stardom and fan favorite Adam Thielen still producing on the outside, there is plenty of room for Conklin to produce in the short and intermediate areas of the field.