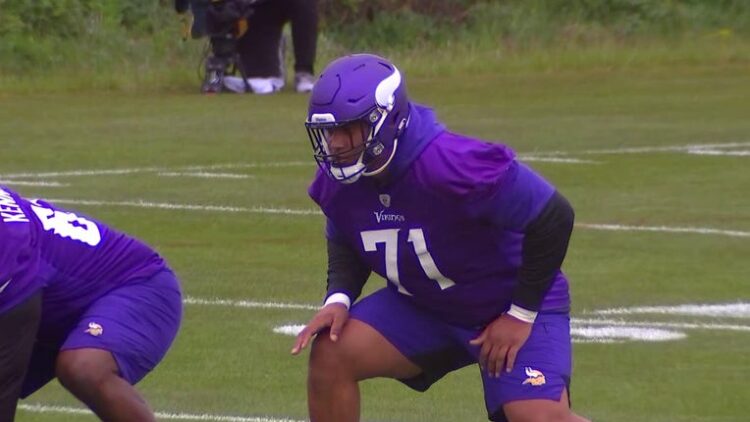 On a day where the offense put up 571 yards in a 34-28 overtime victory over the Carolina Panthers, it’d be easy to focus on the performance of one of the skill players. But perhaps the skill positions thrived because the Vikings’ offensive line had one of its best games in years. This just so happened to coincide with rookie first-round left tackle Christian Darrisaw making his first career start as a member of the Minnesota Vikings. The early returns were promising.

Darrisaw’s name wasn’t mentioned often after FOX commentator Kenny Albert announced the Vikings’ starting lineup. For an offensive lineman, that’s the sign of a pretty good outing. Pro Football Focus credited him with only one pressure allowed and a 70.3 pass-blocking grade, good for first among all Minnesota linemen on Sunday.

His run grade left a little to be desired as he was only graded with a 58.4 score. This was still second on the team, though, and on top of being a rookie, the Panthers have a solid defense. The Vikings ran for 198 yards on 36 carries in the game.

Christian Darrisaw showed Minnesota Vikings fans that he has all of the physical tools to perform at a high level in the NFL moving forward. He still has a long way to go before he is a finished product, but for being 6-5, 315 pounds, Darrisaw displayed good feet in pass protection. In the run game, he used his frame to shield off defenders in the zone running scheme the Vikings rely on. The best is yet to come, and if he can give Minnesota games like this in the immediate future, the Vikings’ offense might take off to another level.