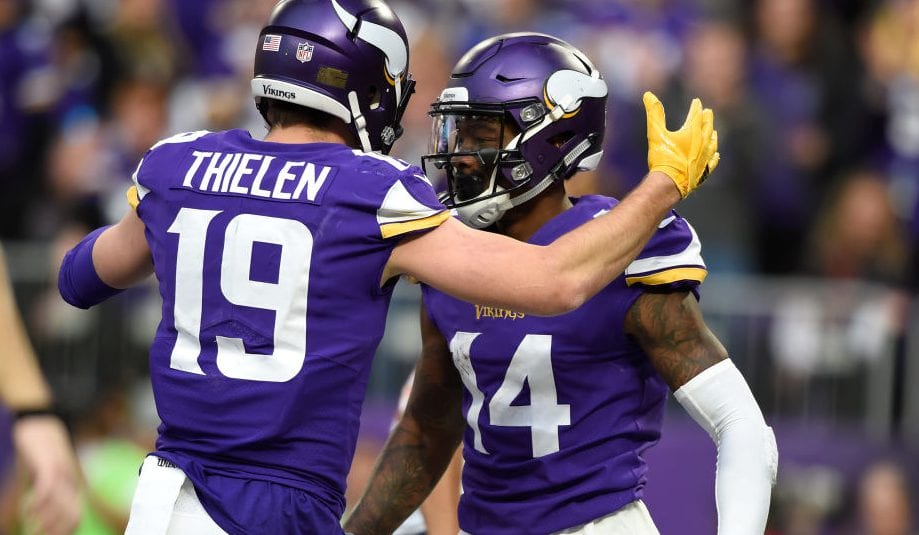 Way back in the distant past that was last October, the world was a different place. The President was Donald Trump, the number one song on the charts was by a group known as Hall and Oates, the public was just falling in love with a wacky little alien named Alf, and people were discussing whether or not the Minnesota Vikings should move on from arguably their most talented offensive weapon in Stefon Diggs.

At the time it wasn’t hard to see why trading Diggs was the topic de jour, as he seemed unhappy with how things were going at that point in the season and he is objectively incapable of hiding his unhappiness. That lead to a press conference in which he verbalized the sort of cryptic things we had only seen on his Twitter account up until that point, saying that there was “truth to every rumor”.

Despite that, and his behavior before it, I wrote an article on the 19th of October that the Vikings should NOT trade Diggs and, considering how that topic seems to be dominating every facet of Vikings online fandom/media/soap box-ery, I feel like it’s time for me to yet again renew that statement because that topic is again dominating the Vikings zeitgeist, and as someone with some say in that arena I felt I had to come out and put my foot down as a representative of those who… Have spent at least five minutes looking into what that might actually mean.

This time things are different, though, as the Vikings have moved on from their 2019-20 offensive coordinator in Kevin Stefanski. His replacement is Gary Kubiak, who is known for running an offensive scheme that relies heavily on two tight ends and the ground game. It’s that reputation that has led many to call Diggs superfluous in a system that, because of it’s supposed reliance on tight ends and running/full backs, doesn’t really need more than one good receiver.

Now, I am a bit more dismissive and sarcastic in this post than usual and that’s because I don’t think this is a valid question. I feel like it’s an interesting topic theoretically, but if anyone in the Vikings media landscape is actually pushing for this, it’s as lazy as it is dangerous for reasons I’ll make painfully clear in this series.

We have to make it clear as media members that we don’t give credence to any calls to trade or cut players unless it’s something that checks a few boxes as it does involve changing a human being’s life while also impacting the fortunes of the team we all love. After all, the team probably would’ve never traded Randy Moss if there wasn’t a large contingent of Vikings fans who had convinced themselves that it needed to happen.

That doesn’t mean that it’s off-limits to raise questions, but we should really do our due diligence as media members to ensure that, again, boxes such as; is this realistic? Is the team considering it? Would it help or hurt the team? Why?

So, again, this topic raises the (first) question, especially for a team like the Vikings that is currently about $12 million over the salary cap, whether keeping two elite receivers (elite in terms of talent and also in terms of their paycheck) on the roster makes sense and whether or not you can get similar output from another receiver (Olabisi Johnson? The draft?) for far less money.

Beyond that, Diggs has been saying a lot of cryptic stuff on his Twitter lately which isn’t necessarily out of the norm for him but because people like me are always looking to break stories (or in my case, hit f5 on Google News for the keywords “Minnesota Vikings” or “If your mom says you’re handsome but every other woman doesn’t, who is right?”) and this is THE Vikings topic right now, people might be projecting their own beliefs about the Diggs situation onto Tweets like this one:

Then there’s his behavior, which was the impetus for the aforementioned article that I covered in October. So, let’s go through each as their own article since this is a serious conversation that requires serious insight, and see whether or not there’s any fire to this smoke and also whether or not there should be.

First up? How Diggs fits into the 2020 Vikings’ plan, ie, the “Kubiak Offense”. As alluded to above, a few people have raised the question as to whether or not having two elite receivers in a system that isn’t necessarily predicated on utilizing wide receivers as much as tight ends and running backs. So, let’s take a look at some of the teams/offenses that Gary Kubiak has helmed and whether or not that holds any water.

That hardly sounds like a team that didn’t utilize its receivers. Their main tight end that year was Owen Daniels who had 46 catches for 517 yards and three touchdowns. Perhaps that year was an aberration, though, as they did have Peyton Manning slinging the rock (the year before his injuries caught up to him, anyway).

Instead, let’s take a look at his time as an offensive coordinator in the single-season he was with the Baltimore Ravens. Joe Flacco’s top two receivers were the then ageless Steve Smith and Torrey Smith (as well as Owen Daniels helming the tight end spot, again). Smith and… Smith combined for over 1,820 yards with a healthy 15.7 and 13.5 yards per grab, respectively. In addition, they had 17 touchdowns between them (with Torrey Smith having 11 of them himself).

Owen Daniels? He had four touchdowns and, yet again, 527 yards from 48 grabs, whereas the Smiths had 128 grabs between them.

The Ravens’ other tight ends, Dennis Pitta and Crockett Gilmore, combined for 26 grabs (hardly this two tight end onslaught we’re being told to expect). Now, the Vikings do have two great pass-catching tight ends in Kyle Rudolph and soon-to-be second-year emerging star, Irv Smith Jr., but to expect them to create the type of numbers or even advantages in this Vikings offense is laughable considering the fact that Diggs is arguably the best down-the-field receiver in the NFL.

This is all supported by data from an amazing article by Joe Mahoney over at the MileHighReport.com.

First, let’s take a look at the breakdown from Kubiak’s entire career, of throws to wide receivers, tight ends, running backs and full-backs.

For a quick reference, the 2019 Vikings passed the ball to receivers 47% of the time, tight ends 28% of the time and running backs 24% of the time. So, Kubiak actually targeted receivers more on average in his career than Stefanski did last season, and you’re telling me you didn’t want to have both Diggs and Thielen last year? But you’d be okay losing him and throwing the ball to the position 8% more in 2020? Yeah. No.

Before you say that it’s because they ran the ball a lot, on average Kubiak’s offenses have run the ball 47% of the time. In fact, Kubiak’s offenses have only carried the ball over 50% of the time in five of over TWENTY seasons and while the NFL seems to be moving away from the type of schemes that Kubiak employs (relying more on 11-personnel/three-receiver sets), the reality is that Kubiak’s teams still pass more than throw, and way more often-than-not would throw to the receiver position AND (spoiler alert), they mainly throw to their top two receivers (I know that all of this sounds obvious, but apparently it isn’t, as people are writing stuff like this).

Let’s take a look at the breakdown within the wide receiver group specifically, seeing just how important the top two receivers are in Kubiak’s system (keep in mind that the majority of these seasons also didn’t have anywhere near the quality of receiving talent that the Vikings currently have in Diggs and Thielen, save for 2015, which had nearly 70% of its targets going towards Thomas and Sanders). Just in case you’re not sold…

Then there’s the “play-action” argument:

The same play-action offense that made Emmanuel Sanders superfluous? Or at least one of the Smiths in Baltimore?

That brings us to the next point, which is going to cover the potential impact on the offense a Diggs trade would entail, which is a topic that we’ll cover tomorrow, but I’ll just say (as a cliff-hanger) that if you think that Thielen broke all those records to start the 2018 campaign all by himself and/or that even in a heavy personnel, play-action offense, going from amazing two receiver options to one would somehow help this Vikings team finally get over the hump… Maybe you should skip tomorrow’s article.

Either way, it’s safe to say that we can at least put to bed the notion that because Kubiak run’s a lot of heavy personnel packages that that means that the Vikings will be like the Gronk/Hernandez Patriots in 2020 because of it, or that the top two receivers in Kubiak’s system aren’t actually the at least one of the most important aspects of it.

I would’ve thought that that would be something I wouldn’t have to actually type or not delete after typing.

Tune in tomorrow for more sarcastic analysis! It’s February people, pace yourselves. Or, tell me why I’m wrong via our message board below (Click Here to create a Free Account).