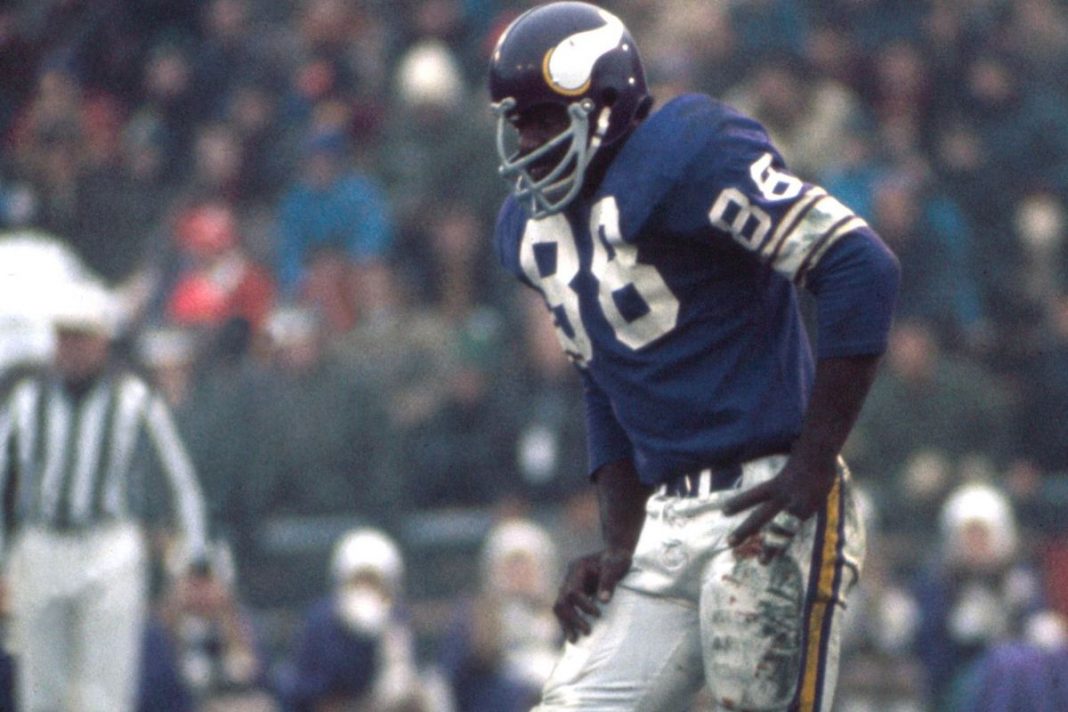 Note: This article comes from resident Boomer, Jerry Carrier, who is a new hire here at purplePTSD.com and will be mixing in his takes on the Vikings news of the day with some looks back at Vikings greats of yesteryear.

There have been some truly great NFL defensive lineman, but I don’t think any have been as dominant on the field or afterward as Alan Page, who could take over a game all by himself. Page was inducted into the NFL Hall of Fame in 1988. He was the first defensive player to win the NFL MVP of the Year with only one other defensive player, LB Lawrence Taylor, has ever won the award. Page was also selected as the defensive player of the Year in 1973.

Playing defensive tackle at a time when there were only 12 (and then 14) games per season, Page still amassed an unofficial 148.5 sacks in his career. There may have been more but the NFL didn’t record sacks as a stat in those days. He recovered 22 fumbles and had three safeties, second-most in the NFL. He also scored three touchdowns.

Page was voted All-Conference 11 times and went to 9 consecutive Pro Bowls. He was selected All-Pro 9 times, six with the first team and three with the second. The quick DT was the Defensive Player of the Week three times in his career. In 1999 he was selected at number 34 to the Sporting News ‘ list of the NFL 100 Best Players of All Time. The Wall Street Cheat Sheet named Page as one of the Greatest Defensive Linemen of All Time. In 2019 he was also chosen as a member of the NFL’s 100th Anniversary All-Time Team.

In college at Notre Dame Page was a consensus All-American and led the Fighting Irish to a National Title in 1966 before being the first-round pick of the Minnesota Vikings in 1967.

Page attended law school while he played with the Vikings and was also their player representative for seven years and served on the NFLPA Association Executive Committee. In 1995 he received the NFL Alumni Career Achievement Award for his success in his post-NFL career. Page was an Assistant Attorney General in Minnesota and was elected in 1992 to the Minnesota Supreme Court.  In 2018 he was awarded the Presidential Medal of Freedom.

In 2010 All Rise, The Remarkable Journey of Allan Page, a biography was written by Bill McGrane with a foreword by President Clinton was written about his life.