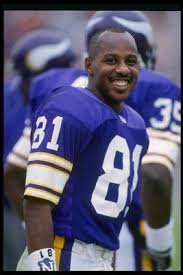 How did Michigan Wolverine coach Bo Schembechler talk a young wideout from Florida to go to Michigan?  A program known for their running offense? Well I don’t know the answer to either question, but either way future Viking Anthony Carter came North and set records and dominated in the Big 10 Conference.

His legend was born on his very first punt return, which he ran back for a 78-yard touchdown.  While he went on to earn All Big 10 honors with 3,076 yards and 37 touchdowns, I remember that as one of the first dual threats in football, AC was a great punt/kick return option for Michigan. Carter added another 1,606 yards from returns in college, making him one of the prime picks in the 1983 NFL draft. But something happened along the way, the United States Football League, however the Dolphins took him in the 12th round, THE 12th round of the 1983 NFL Draft just in case.  In my opinion they got the biggest steal in the draft, just in case the USFL didn’t work out.

A brief reminder for my younger readers, the USFL was a spring league that started in 1983 and lasted for about four years. They did however land top tier players from college like Hershel Walker, Steve Young (and his famous $40 million-dollar contract in LA), Jim Kelly, Doug Flutie, and Anthony Carter to name just a few.

The USFL used a territorial draft and that is what helped AC land with the Michigan Panthers to start his pro career.  His finished his first year with over 1,000 yards receiving and he was off and running. But a broken arm shortened his second year, and as the USFL started to fail, it was time for AC to look towards the NFL.

Although the Miami Dolphins owned Carters NFL rights, he was traded to Minnesota without playing a game for Miami. I vividly remember that time, and the excitement I had that the speedster was coming to Minnesota and most likely bringing all those touchdowns with him. I was so excited to see him as a Viking; I would tell my friends that AC was going to be a huge addition for us, something that he did not disappoint during his career with the Vikings.

When I think of Anthony Carter, I think of a player who started setting a different standard for Vikings wideouts.  Before Jerry Rice became famous for his crossing routes, AC was a master of that route and if you look at the old highlights, you will see what I’m talking about (especially against the 49ers in the 1988 playoffs, which I’ll get into below). Blessed with speed and great hands, he was a receiver who had no fear, and added some much-needed talent at wideout for the franchise. The Vikings needed help at the time as the Vikings had serviceable talent but nobody with Carter’s talent at wide receiver. He added instant credibility to our offense and opposing defenses took notice.

AC became must watch football for me as a fan. He would catch passes at their highest point, much like Randy Moss did in his prime.  With solid QB’s like Tommy Kramer and Wade Wilson throwing him the rock, AC helped establish a championship quality offense. And in 1987 our Vikings went on a playoff run for the ages.

In 1987 the Vikings finished 8-7.  But the Vikings lucked out and landed the final Wildcard for the playoffs and then AC and the Vikings went off. It started in the Big Easy as our team took on the Saints, Carter went off with 143 punt return yards including an 84-yard TD return.  The Vikings crushed the Saints 44-10 which set up a meeting with the 49ers (as mentioned above). I remember all my friends talking about Carter being their favorite Viking all of a sudden, the state of Minnesota did fall in love with him at that point and as many people in my age range now say, “before there was CC, there was AC”.

The Vikings went on to shock San Francisco behind AC’s 10 receptions for 227 yards, and even with no touchdown’s AC was unstoppable that day.  It finally felt like we had “THE” elite receiver in the NFL, he was unstoppable. The Vikings would lose to Washington in the NFC championship game that season, but it was AC who helped propel us back to the elite in the NFC.  Also, he still has the record with 642 all purpose yards from the 1987 playoffs.

I feel Carter gets lost in the mix of all time Vikings, especially when two hall of famers came after him and dominated in spectacular fashion. But AC is right behind Moss and Cris Carter and I hope Vikings Nation remembers his contributions.  He might have been our first highlight reel receiver, but he was also one of the best to do it in Minnesota, and was contributing right up until he left and signed with the Detroit Lions which was his final season in the NFL.

3 Time All American at Michigan 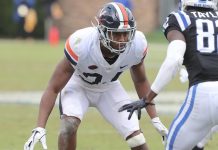 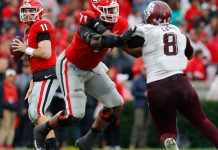