purplePTSD.com
Home News This Sunday, Vikings Played Like Past Champions 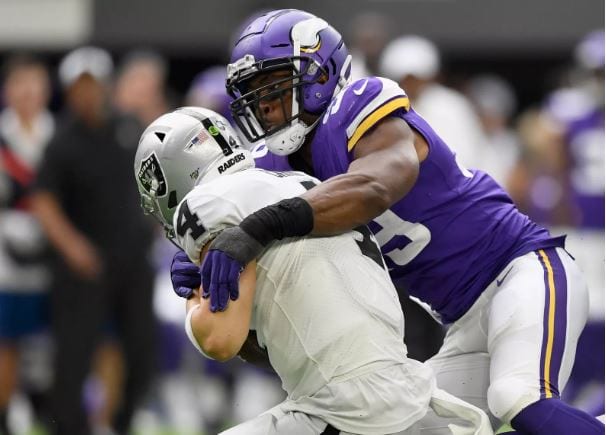 *Note from the Editor: We’re extremely honored to be working with Vikings61.com (The ‘V61’) this season!    The V61 is a new Vikings news/content site with some of the best writers in the Vikings media landscape.

As US Bank Stadium celebrated the 50th anniversary of the 1969 NFL Champion Minnesota Vikings, their 2019 counterparts showed some championship football of their own.

If a fan wrote up an ideal game scenario to honor the likes of Jim Marshall and Bud Grant and two dozen players of the 1969 Minnesota Vikings who were present for a 50th anniversary of their NFL Championship, how would it play out?

In the first quarter they would probably run the ball with ease behind a tough, athletic offensive line, then score on a play fake, bootleg left, and zero strike to a streaking deep post on their possession.

Yeah, that would be cool.

The Vikings would then stuff the run and stymie the pass of their opponent–say some old AFL legend like the Oakland Raiders–then score on two of their next three touches, running the ball with aplomb, while mixing in key first downs with a short passing game.

The quarterback would be consistent if not remarkable, the kicking game solid, and the defense nearly airtight. They would win the game with a smile on their faces before the third quarter ended, not even having to throw a pass in the game’s final frame.

Man, it would be nice if such a game was given to those old guys sitting at midfield at halftime, struggling to rise out of their chairs to wave to the crowd at when their names were announced. They were the old guard, the team that made the Minnesota Vikings the team of a generation–and beyond.

Yeah, it sure would make everybody’s Sunday.

With Dalvin Cook beginning now emerging as one of the NFL’s most dangerous offensive weapons, all that was needed after the Vikings’ more-than-convincing win over Oakland was a positive examination of the quarterback position.

Kirk Cousins, enjoying a 15/21, 173 yard and one touchdown performance produced a perfect specimen. His game rating was 112.0, he took no sacks and did not turn the ball over once.

Happy to watch his running backs average 6.3 yards a carry and produce 198 rushing yards on the game, Cousins was as cool as a banker handing the ball off and executing high percentage passing plays off its effectiveness.

Mike Zimmer’s defense held Raiders’ quarterback Derek Carr to a mere 5.6 yards on completed passes, and his offense to 3 of 11 on third down conversions. The game was 34-7 before Carr padded his stats against umbrella coverage and many of the Minnesota second team defense.

Not just for the old-timers, but for every Viking fan who has drawn their hand to their head in the last season watching field goal kickers disappoint, we also had the rarest of opportunities to watch the Vikings’ placekicker, Mr. Dan Bailey, convert all six of his kicks, including 4 extra points and field goals of 24 and 50 yards on this Viking Harvest Sunday.

In a final note to sum up the nearly perfect afternoon, we got to watch Raiders’ kicker Daniel Carlson, the rookie who was cut from Minnesota last season only to land in Oakland (where he summarily converted 94.1% of his field goals), line up for 51-yard attempt in the fourth quarter.

The kick hit the uprights and fell to the turf.

It was the perfect no good on an all good Sunday.