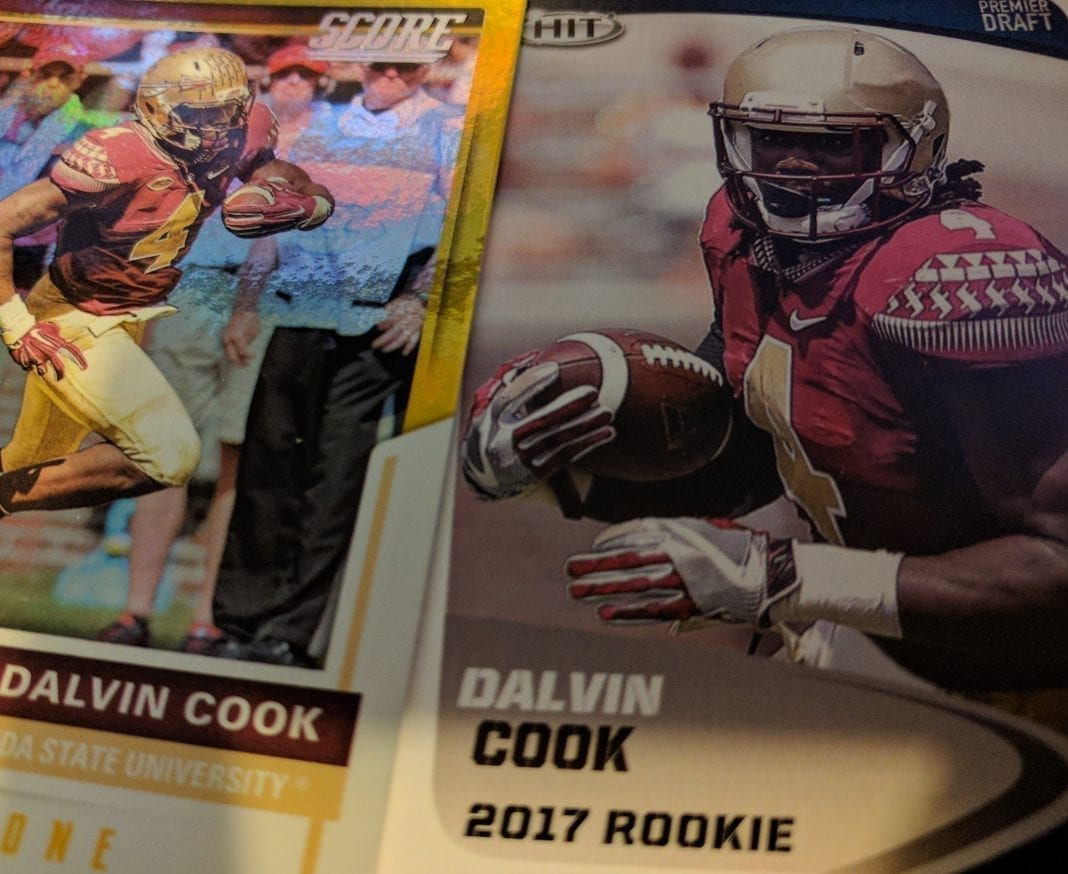 Ah, summer time. The grass is green, the skies are blue, and the football offseason is over halfway through. If you were anything like me as a kid, you spent your summer days at the park playing ball with the boombox blasted on high, mowing lawns for spending money, and then spending that hard-earned cash on sugary drinks and packs of trading cards at the hobby shop. In an effort to relive my childhood (And in pretending I’m not rapidly advancing yet another step closer towards old age and the great unknown that follows), I decided to bust open a couple packs for old time’s sake. Like any good Minnesota sports fan, I bought the product adorned with the visage of the great Dalvin Cook, newest running back and highest draft pick on the year for the Minnesota Vikings, embossed on the front of the package.

But wait, what’s this? Upon tearing into that shiny plastic and observing my cardboard loot, I noticed something peculiar about the cards within. None of the players wore their logos on their helmets! I decided to do some investigating, and in doing so, I learned about the secret monopoly of team logos in the football card collecting world.

According to Sports Collectors Daily, in early 2016 the NFL licensed out the use of its team logos exclusively to Panini America, a subsidiary of Panini Group, a company headquartered in Modena, Italy, which produces books, comics, magazines, stickers, trading cards, and other collectible merchandise. Panini America CEO Mark Warsop stated in a news release, “We are committed to continue building compelling products that honor and celebrate the NFL and look forward to working closely with the NFL to continue to grow the football trading card category in the U.S. and globally.” Unfortunately for the football trading card market, this move ultimately works towards phasing out Panini’s competition. For example, trading card behemoth Topps has since opted out of producing football cards, unwilling to produce cards lacking team logos on their products.

Topps isn’t the only company to forgo it’s football card production due to growing demands of the football card market. Pinnacle Brands was a trading card company from 1988 to 1998 which made its claim to fame in being the first card company to use full-color photos on the card backs in a set of baseball cards they introduced as Score. However, as stated by Baseballcardpedia, the company filed for bankruptcy in the summer of 1998 after their products began to rely too heavily on gimmicks– going so far as to package their cards in soup cans! After filing for bankruptcy, its remaining assets were auctioned off to Playoff Inc.

Playoff Inc. is interesting in its own right, as it became a subsidiary of Donruss, which was founded in 1954. Donruss used its newly procured licensing to produce trading cards under the title Donruss Playoff until March 13, 2009, when the company was bought by none other than, you guessed it, Panini. The company was immediately renamed Panini America and they’ve been using the leftover assets to produce football cards under their name ever since.

It seems the football card industry isn’t going down without a fight, however, as Sage, the company I purchased my Dalvin Cook themed 2017 Hit Premier Draft High Series cards from, takes matters into their own hands. Since 2010, Sage has been airbrushing the team logos off of their cards, maneuvering around the NFL’s restrictive licensing policy, and selling their cards outright. In fact, Sage works so closely with NFL draft recruits, that they make deals with the players to sign cards before they hit the big leagues. If you’re lucky, you can even pull an autograph from a number of NFL drafted players, including running back Christian McCaffrey, the eighth overall pick selected by the Carolina Panthers, quarterback R. Joshua Dobbs, the fourth round selection by the Pittsburgh Steelers, or even the new Vikings rising star running back, Dalvin Cook. (Sage isn’t the only football card company producing logo-less trading cards. Leaf Trading Cards, founded in 2010, operates the same way, expertly airbrushing away team logos.) 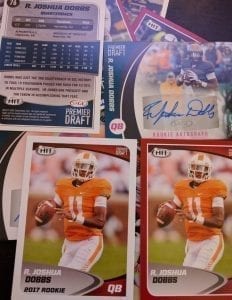 Speaking of autographed cards, I plan on providing coverage live from Mankato at Vikings Training Camp this year. While I’m there, I’m hoping to have Dalvin Cook grace this Sage rookie card with his autograph. Do you think the former Florida State Seminole will mind if I request he redraw his arrows back onto his helmet with a red Sharpie? 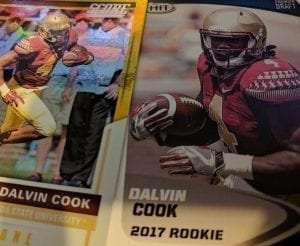