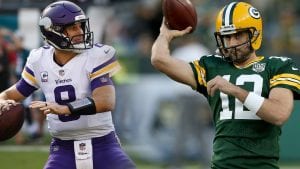 Aaron Rodgers and the Green Bay Packers are off to a hot start with an impressive week 1 road win against the division-rival Chicago Bears. The NFL regular-season opener came down to who played better defense and in the end, Rodgers and the Packers offense made more plays then Mitchell Trubisky and the Bears did.

The Vikings on the other-hand steam-rolled the Atlanta Falcons 28-12 in their home opener where the entire team (special teams included) seemed to be firing on all cylinders. The Packers have not beat the Vikings in Lambeau Field since 2016. So what is it going to take to ensure that this trend continues this week?

*Stats are based off of Green Bay’s Week 1 matchup against the Bears in Chicago.

Scouting the Opponent with Bruce from “Packers for the Win”