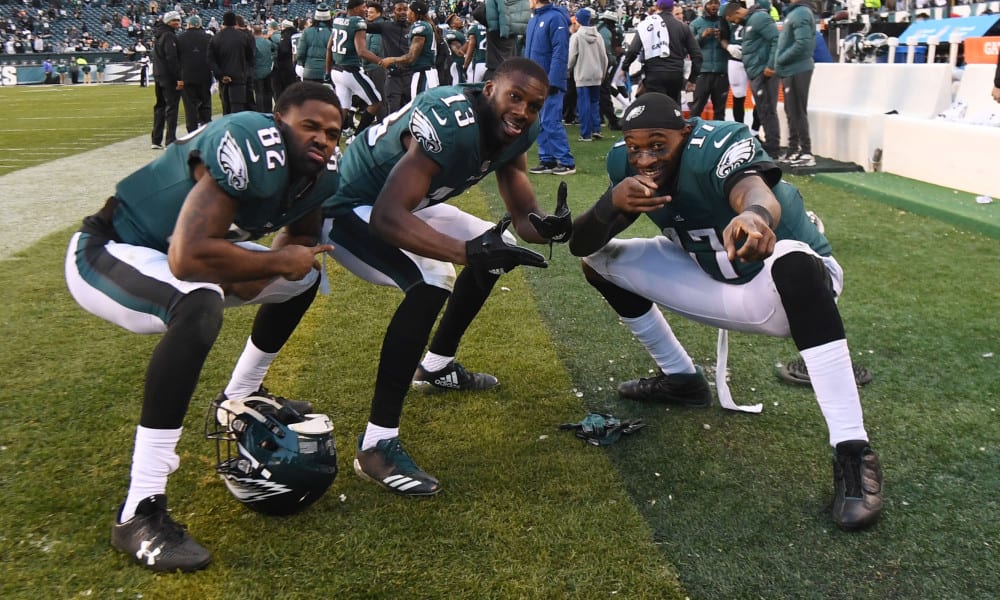 Editor’s Note: This article comes from ‘The V61’ (vikings61.com), a friend and partner of Purple PTSD and Vikings Territory! Check out them out daily for news, analysis, and history of the Vikings!  Follow the V61 on TWITTER here!

After a humiliating defeat in the 2017 NFC Championship Game in Philadelphia, the Vikings returned to the same place to beat the Eagles in a much-closer game in 2018.  The rubber match is in U.S. Bank Stadium on Sunday.

Did the week five win in Philly really satisfy the appetite for revenge that the Vikings and their fans had for all things Philadelphia Eagles last year?

In that moment, yes.  But the feeling just didn’t last.

The 2017 NFC Championship Game, won by Philadelphia with a resounding score of 38-7, brought out the best in the Eagles and the worst in their fans, with stories of visiting Vikings’ fans being harassed during the home team’s big win more than obvious on the Internet.

One might say that a football team is not responsible for the behavior of its fans, but I think you’re wrong.  And so does old Cincinnati Bengals’ coach Sam Wyche.

But perish the thought Philly could celebrate a big win without having a group of followers being drunken adolescents about it.  It seems to be in the nature of their numbers.

In 2018, the Vikings came into Philadelphia in much the same way they traveled to New York last Sunday.  They were 1-2-1, with recent losses being a whipping at home by a rookie-led Buffalo Bills team, followed by an aerial shootout that they lost in Los Angeles to the eventual NFC champion Rams.

Honestly, not many people expected the Vikings to win last year in Philadelphia, and I was one of them.  Luckily, for us and the team itself, the Vikings’ defense decided they could win and showed up, much to our very pleasant surprise.

This time it was Eagles’ quarterback Carson Wentz that was harassed, getting strip-sacked in the second quarter and watching a diesel engine named Linval Joseph rumble 63 yards for a return touchdown.  The Vikings held a commanding 20-3 mid-third quarter lead and coasted to a 23-21 victory.

The big difference in the 2019 scenario between these rivals is the fact that the Eagles are a better team than the Giants team that Minnesota just dominated in New York.

They have wins against Green Bay at Lambeau Field and an impressive home takedown of an awful New York Jets team last Sunday, where the Philly defense amassed 10 sacks and two defensive touchdowns.

However, for the record, the Eagles also lost on the road to a 1-4 Atlanta Falcons team and at home to the Detroit Lions.  They are a better team than the Giants (without RB Saquon Barkely), but not by much.

The green magic of the Eagles’ starting/reserve quarterback Nick Foles is gone and Carson Wentz now stands tall, permanently in his place.  Wentz has shoes to fill and obligations to meet, having just signed a deal until 2024 worth up to $144 million, with $66 million fully guaranteed.  The Eagle defense is first in rushing yards allowed, but 27th in passing yards given up.  Sounds like a recipe for a play-action game design from Vikings’ coaches.

Men On A Mission

This game is not as easy as laying down the numbers.  It’s going to be fleshed out by quarterback play.

The Vikings Kirk Cousins now has the chance to show his teammates, coaches and fans that he can indeed led this Viking team to victory over winning teams with talent.  His counterpart, Wentz, is intent on rebuilding his resume as one of the league’s elite quarterbacks and returning Philadelphia to it’s perch atop the NFL.

This rubber match has made its way to Minnesota, and the stakes are high.

Open message to Mike Zimmer in the Vikings from a fan:

Please beat this team for us, and we promise not to harass the folks in green-and-white who may be visiting Minneapolis for the game.

One, it’s fan sportsmanship.  Two, there’s a good chance they just might have a pair of brass knuckles tucked away.