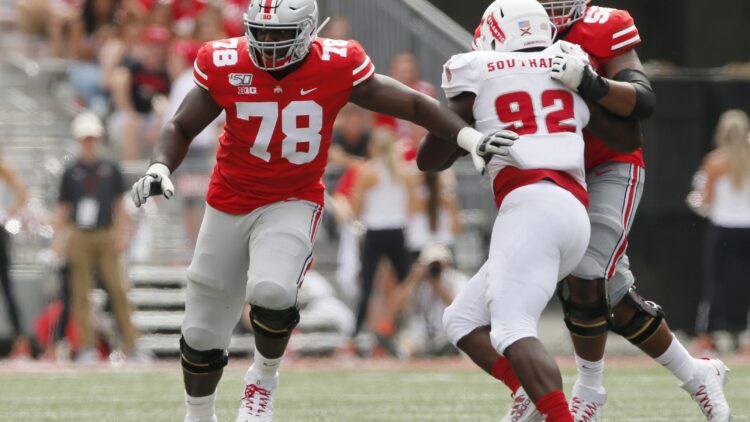 Entering the 2020 season, the Minnesota Vikings implemented piecemealed plans at the right guard spot of the depth chart. The best-case scenario – and some fans were even optimistic about this – involved a combination of Dakota Dozier, Dru Samia, Kyle Hinton, and maybe a splash of Pat Elflein and then-rookie Ezra Cleveland.

Dozier’s year-end Pro Football Focus grade was 44.6, fourth-worst in the NFL among qualifying guards. Samia’s was worse, if that’s fathomable. He registered a spine-chilling 33.1 PFF score. Pat Elflein was waived in mid-November. And Cleveland actually performed rather well for a rookie.

This year, the plan is different. The aforementioned Dozier and his 44.6 grade were re-signed in the spring, presumably for depth. He even received some first-team reps at Vikings minicamp in June. But the Samias and Elfleins were not mentioned by general manager Rick Spielman on Tuesday when the Vikings boss talked about right guard:

While Dozier is technically the incumbent – albeit a Herbert Hoover type – Spielman did not mention him by name. The other two Vikings, Mason Cole and Wyatt Davis, are entirely new to the RG discussion.

Cole, 25, was traded by the Arizona Cardinals to the Vikings in March for a 6th-Round draft pick. In ordinary Spielman-Zimmer years, the Cole transaction would have been perceived as the offensive line “big move” of the offseason. More on that later.

But Cole is a young trenchman that can play guard and center, signaling versatility that the Vikings fancy. He may have been acquired as the presumptive starter at right guard – he might even win the job – but the plot thickened at the NFL draft. Cole played 913 offensive snaps in 2020 for the Cardinals en route to an average 54.4 PFF grade. Indeed, that is better than Dozier and Samia, but still isn’t good. It’s serviceable.

On the plot-thickener, his name is Wyatt Davis. And he was drafted because Minnesota’s guard play during the pandemic season was so stinky. From Ohio State University, Davis was theorized for a lot of 2020 as a 1st-Round pick. His final season at Ohio State was mired by “secret pain” and a disappointing showing versus Christian Barmore of Alabama in the National Championship. As a beholder of sheer talent, though, Davis should be considered the frontrunner to start for the Vikings at right guard sooner than later. Spielman found Davis after a nifty trade on draft night that lassoed Christian Darrisaw (LT), Kellen Mond (QB), and Davis for the Vikings, sending Alijah Vera-Tucker (G) to the New York Jets via draft-pick swap.

And Spielman name-dropped Oli Udoh, too. He joined the Vikings in the 6th Round of the 2019 NFL Draft from Elon University. Udoh has only played 35 snaps for the Vikings in two seasons, but at age 24, now is the time to blossom if he has it in him.

Ezra Cleveland will likely play at left guard in 2021, shoring up quarterback Kirk Cousins’ blindside along with Darrisaw, the rookie left tackle. In theory, Davis could probably play left guard, but that would leave Cousins’ fate to two rookies.

The OL feel is certainly different. Minnesota even rearranged coaching responsibilities as offensive line coach Rick Dennison was shifted to ‘Senior Offensive Assistant’ as a result of some COVID vaccine jostling. Phil Rauscher, an assistant to Dennison, formally takes the big job.

Via PFF, the Vikings ranked 29th in the NFL during 2020 for pass protection.