Minnesota’s Offensive Coordinator Solution May Already Be Under Contract 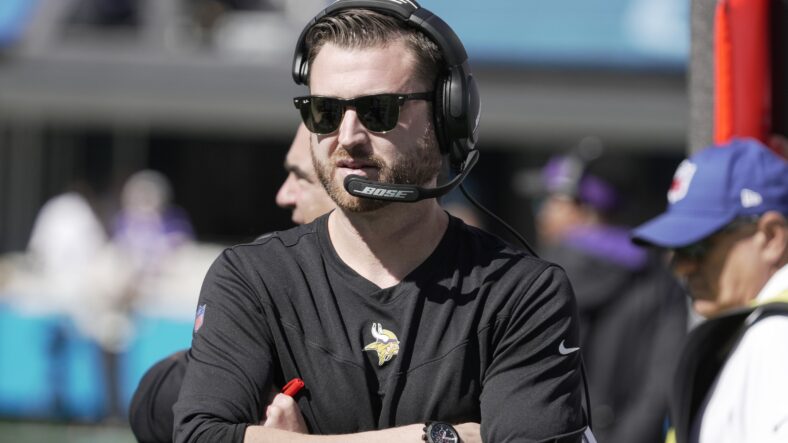 Since before the season even ended, there has been no shortage of wailing and gnashing of teeth when it comes to Minnesota’s offensive coordinator position. It’s clear that Klint Kubiak ought not to have been elevated to this role. At times, the rookie OC was overmatched. He certainly did show improvement as the season continued, but it was too little, too late. It’s time for a new OC.

Who will take over at OC, though? Apparently, Klint Kubiak is drawing interest from other teams. Regardless of what happens there, it’s highly unlikely he sticks around. Minnesota’s offensive coordinator solution, then, will be among the new leadership’s top priorities.

May I humbly submit Andrew Janocko as an option to consider?

He’s only 33, but he has nine years of NFL experience. Before joining the Vikings, he worked for Tampa Bay. In his seven years in Minnesota, Janocko has been an offensive quality control coach, offensive line coach, wide receivers coach, and he is currently the QB coach. One could argue that this past season was the best of Kirk Cousins’ career; one could also argue that Justin Jefferson had the best rookie season of any receiver in NFL history. Janocko coached him that year.

Of course, a lot needs to happen before we learn too much about the offensive coordinator spot. Nevertheless, it’s at least somewhat notable that Janocko has relatively extensive experience coaching various positions on offense. It’s also notable that he played QB in college. If the Vikings hire an offensive head coach, don’t be shocked if they elevate Janocko to the OC spot. It would allow a young, upside coach to learn under the tutelage of someone who gets final say on the offense.