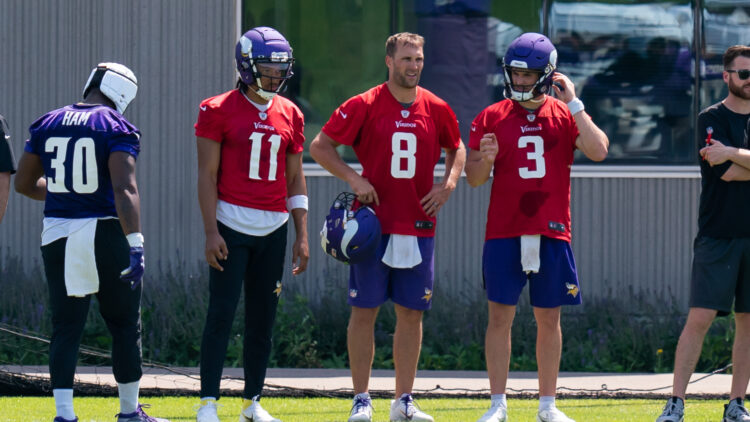 Minnesota’s decision about who will be their future QB will largely flow from what Kirk Cousins can do in the season’s final 11 games. He has been very, very crisp in the opening six weeks. Unfortunately, his play has resulted in a modest 3-3 record. Based solely on his performances, Minnesota would be sitting at a 5-1 record. Alas, football is a team sport.

In his recent conversation with the media, Rick Spielman addressed how the team may handle Kirk’s contract in the future: “I’ll sit down with Rob [Brzezinski, the Vikings Executive Vice President of Football Operations] at the midway point and see where our guys are playing and where we’re at cap-wise.” Spielman goes on: “We do have some challenges coming up next year … we do look ahead and understand where our cap will be next year […] You still like to see what evolves over these next — through the regular season and through the playoffs, and we’ll make some final determinations then.”

In other words, it’ll be important see how Kirk plays the rest of the way. His performance will make Minnesota’s future at QB much easier to understand.

Kellen Mond has yet to make an impact in a purple uniform. Spielman, with his usual poker face, seems unfazed: “The thing that maybe set him back a little bit is when he missed those 10 days for COVID during training camp, which is critical […] Training camp is a really critical part of a rookie’s development. But you see him, and we see him out here practicing, in how he’s progressing every day.”

According to Spielman, it’s hard to say what they’ll do with Kirk’s contract following the season. It’s also no reason for concern, but Mond’s developing slowly.

Would it be better if things were clearer? Of course, but at least we didn’t alienate one of the game’s all-time great QBs by opting for a passer at the end of the first. Green Bay could have given their offense a weapon to help get another Super Bowl; I’m thankful they didn’t. I may be proven wrong in the end, but I think they’ve flown too close to the sun.

Enough of the Peckers. This is a Vikings QB post.

If Cousins keeps performing like he currently is, Minnesota’s future at QB will be relatively clear. We’ll head into the offseason with a clear mandate: extend Cousins to get that 2022 cap hit down. We also ensure that we don’t face such QB uncertainty for at least a few more years.

For whatever it’s worth, it certainly appears like Zimmer is coming around to Cousins. Here is what the HC had to say when answering a question his QB’s clutch factor: “I don’t know – you guys (in the media) know all the stats on second-half comebacks or fourth-quarter comebacks and all that stuff, but I know that he’s done an awful lot. Even since that New Orleans game down in the playoffs, he’s done this continually now. I think that breeds a lot of confidence in him in some of the 2-minute drills. We talked about going some 2-minute during the game today, too. We weren’t on the ball a couple times, and we didn’t really go 2-minute. But he’s been really successful at it.”

Folks, a QB who is never hurt and consistently offering top-quality play is one who we want to keep around. If – and there’s a major emphasis on that two-letter word – Cousins continues his strong play, then the QB uncertainty will fade away. From the outset, Cousins was vocal about his desire to end his career in Minnesota. He can ensure he does so by resurrecting a 2021 season that got off to a rocky start.