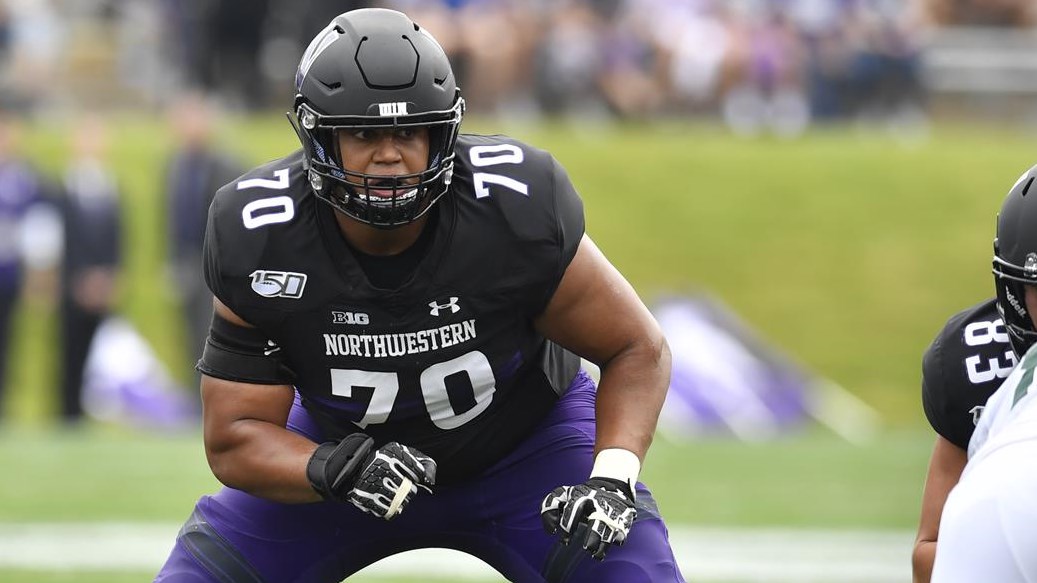 Back again for another mock draft. This time using The Draft Network’s Mock Draft Simulator, we go four rounds without trades and use all four fourth round picks that the Minnesota Vikings currently have. Following Mike Zimmer’s comments about this being his worst defense, that’s the focus in this mock draft.

As a whole, this draft is a defense-heavy group. However, Minnesota’s top pick is an investment into the offensive line. Rashawn Slater is an athletic, versatile player that can certainly cement a line that can give time for the handful of talented skill position players the Vikings have.

Slater can play either tackle or guard, he doesn’t have the natural tackle build especially in his arm length but it didn’t bother him much at Northwestern. He’s a bruiser in the run game and would fit well with the Minnesota scheme leading the way for Dalvin Cook. Slater is also one of the only players who didn’t look foolish against Chase Young back in 2019.

The Vikings have to get better in the trenches on the other side as well. Christian Barmore is a player that can take the group to another level. The Alabama product is still very raw as he’s been a rotational piece for the Crimson Tide. That part is what makes him exciting. When he’s on the field he flashes. Barmore uses a good swim move and is powerful with his hands. He can win as a pass rusher and run defender.

Similar to Barmore, Bubba Bolden is good when he’s on the field. Injuries and off the field issues have limited to 20 games since 2017 at USC and Miami. Nevertheless, in the safety position Bolden provides a lot for a team. Playing high in a deep zone or coming down in run support, he adds to a team that might have to replace Anthony Harris this offseason. At times, he struggles with pursuit angles but the more he plays the hope is that improves.

David Moore is a pick that’d bring a smile to Minnesota fans that are tired of the interior offensive line getting bullied. A typical guard body, Moore is a force for any defense to deal with. He might not be the perfect fit for the Minnesota scheme, but his aggressive, mean play style is a swagger Minnesota has been missing on its line. He’s athletic enough to pull in the run game and get out on screen passes.

The Vikings should double dip in a position of need like they did in 2020 with cornerbacks Jeff Gladney and Cameron Dantlzer. Plug in Jordan Williams on the defensive front. Williams doesn’t add much as a pass rusher, but he’s a run stuffer for the Clemson defense. Heading into Week 17, Minnesota’s 135 rushing yards allowed per game ranks 28th in the league. Williams is a piece that can help anchor the run defense and should be used as depth with one of Minnesota’s four picks in the fourth round.

Dimitri Moore makes sense for Minnesota for two reasons; linebacker is a sneaky need and he tackles well. Eric Wilson, who has played the most linebacker snaps this season for Minnesota is a free agent after this season. The Vikings have a potential out with Anthony Barr’s contact this offseason. If those two leave, insert Moore, a former SEC All-Freshman player. In two full seasons before 2020, he had 183 tackles across 24 games. He’s also serviceable in coverage to be a three-down linebacker next season.

At this point of the draft, it’s finding players that can make an impact at major positions. Deangelo Malone, the 2019 Conference USA Defensive Player of the Year, can be one of those guys. He’s not the biggest guy, resulting in a lack of usefulness in the run game. However, Malone has a big motor, length and burst to find success as a pass rusher. He’s a player that could be used in pass-rush situations early on in his career and might develop into something even bigger as time goes on.