Minnesota Gets a Bargain With Everson Griffen’s Contract 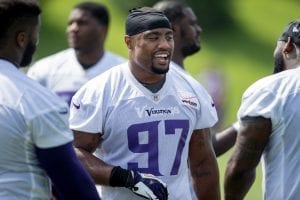 Perhaps the most exciting purple news from the week was the Everson Griffen signing.

Initially, the contract details weren’t known, but the safe money (pun intended) was on a modest deal. Even still, it’s at least somewhat surprising to see Griffen making so little:

Shortly thereafter, Cronin provides further clarity on the Griffen deal, explaining that the cap charge for getting placed on the IR would actually be a mere $465,000. The good people at Over the Cap have already put Griffen’s deal into their Minnesota Vikings salary cap page. Things are basically what they were before. Our Vikings still have just under $13.5 million in cap space at the moment, so one could reasonably ask whether Spielman has any more tricks up his sleeve.

Griffen’s addition helps further bolster a defensive line that has the capacity to dominant. If everything comes together (admittedly, there’s a lot riding on that word “if”), Minnesota will have a ferocious d-line rotation.